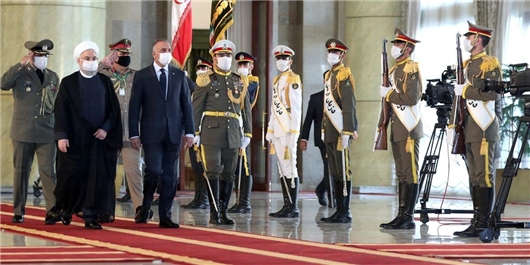 TEHRAN (FNA)- High-ranking Iranian and Iraqi officials in a meeting in Baghdad conferred on ways to implement mutual trade agreements and facilitate exchanges between the two countries.

Senior Iranian and Iraqi officials held a meeting in the Iraqi capital, and stressed the need to reach the level of 20 billion dollars in their trade exchanges.

The meeting was held between Iran's Ambassador to Iraq Iraj Masjedi and the Iraqi minister of commerce in Baghdad late on Wednesday.

The two sides reviewed issues related to Iran's exports of gas and electricity to Iraq.

Iran and Iraq stressed enhancement of trade exchanges to the level of 20 billion dollars during the July visit of Iraqi Prime Minister al-Kadhimi to Tehran.

Last month, Iranian First Vice President Es'haq Jahangiri reaffirmed the resolve by Iran and Iraq to expand bilateral relations, and said that both sides will achieve their objectives by preparing a comprehensive document on trade cooperation.

"The ties between Tehran and Baghdad in different fields such as oil, gas, and electricity has been expanded significantly, but there are still other various fields for the expansion of economic relations," Jahangiri said, addressing the joint talks of high-level delegations of Iran and Iraq.

He referred to financial and banking relations as a prerequisite of expanding economic ties, calling for the implementation of agreements between Iran and Iraq in the field of finance and banking sector.