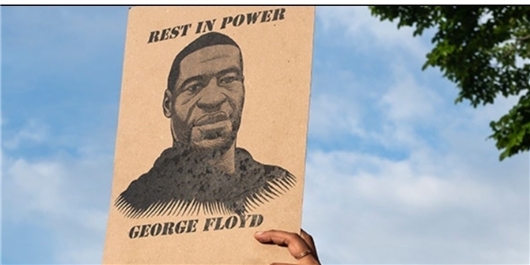 Thao is also heard stating that he was worried Floyd could have been experiencing "superhuman" strength as a result of overdosing on drugs at the time of the arrest, according to Daily Mail.

The interrogation video was released by the court on Friday and shows Thao speaking with investigators from the FBI and Minnesota Bureau of Criminal Apprehension.

Thao is charged with aiding and abetting second-degree murder and manslaughter in the Floyd case and is currently out on bond.

He is one of four former Minneapolis police officers charged in the May 25 death of Floyd, who died while being arrested after a police officer - Derek Chauvin - knelt on his neck for nearly nine minutes.

During the interview, Thao said that he was focused on controlling the increasingly "hostile" crowd that had gathered to watch as Floyd was arrested.

When asked if he saw then-partner Chauvin’s knee on Floyd’s neck during the arrest, Thao responded "At some point, yes," but noted that he wasn't exactly sure where Chauvin had been applying pressure on Floyd's body because his attention was on the crowd.

Thao's body camera footage, which was released Thursday, shows Thao dealing with the crowd while also, at some points, watching Chauvin and Floyd, who can be heard saying, "I can't breathe".

When an investigator asked, "Was the crowd letting you know there was a change in Mr. Floyd’s disposition?" Thao answered, "Yes".

Thao also said, "They were saying he wasn’t moving."

The investigator then asked if Thao had "concerns about that", to which Thao said, "I was concerned about the crowd. I would hope the other officers would do their job."

Thao noted that it "was not my job" to check on Floyd during the arrest, despite the crowd having been telling him to "look at" Floyd and "check on him".

Thao also said his training led him to believe that Floyd could actually breathe at the time.

Floyd was "saying that he couldn’t breathe, but then he was obviously yelling and talking," Thao said, later adding that his "heart sank" when he heard Floyd had died at the hospital.

When an investigator asked "Do you think you could have done something differently to intervene?"

Thao said, "I’m under the belief that you can always do something differently on every single call… I guess I would be more observant toward Floyd."

During the interrogation, Thao told investigators that he and Chauvin had been waved off from the Floyd scene when they were about halfway to the location, but that they had opted to go to the scene anyway to offer backup for the two rookie officers, J. Alexander Kueng and Thomas Lane.

Both Kueng and Lane have also been charged with aiding and abetting both second-degree murder and manslaughter in Floyd's death.

Thao told investigators that he was worried about Floyd experiencing "excited delirium" - a syndrome that can involve violence and unexpected strength - at the time of his arrest because there was the possibility that Floyd was overdosing and could've been dangerous at his size, even while handcuffed.

Floyd has been described as being six-foot six-inches tall and weighing over 200 pounds.

"Potentially very explosive and violent. Um, if drugs in their system, they can kind of have that super human strength," Thao said of his concerns.

Thao said that when he and Chauvin arrived at the scene, they saw a police car's door open and that Floyd was resisting efforts to voluntarily sit in the vehicle.

In body cam footage, Floyd can be heard saying he's claustrophobic and asking to be put in the front seat of the car instead of the backseat.

"Floyd is a bigger guy. He's bigger than all of us," Thao told the investigator, adding, He's yelling... doesn't want to go into the squad car."

At some point during the struggle to get Floyd into the car - a move that Thao couldn't explain why was necessary - Thao said that he suggested putting Floyd on the ground instead.

Thao admitted that he never attempted to talk to Floyd and ask him what the problem was because he assumed that the officers who were first on the scene had already done so.

Thao also said that although he and Chauvin had known each other for about three years, they "really don't talk much outside of work".

None of the four former officers have entered formal pleas.

Thao and Lane's lawyers have asked that the cases against them be dismissed, while Kueng's attorney says his client plans to plead not guilty.

On Wednesday, prosecutors filed a motion requesting that all four of their trials be joined to avoid adding to the potential trauma experienced by witnesses and family members.