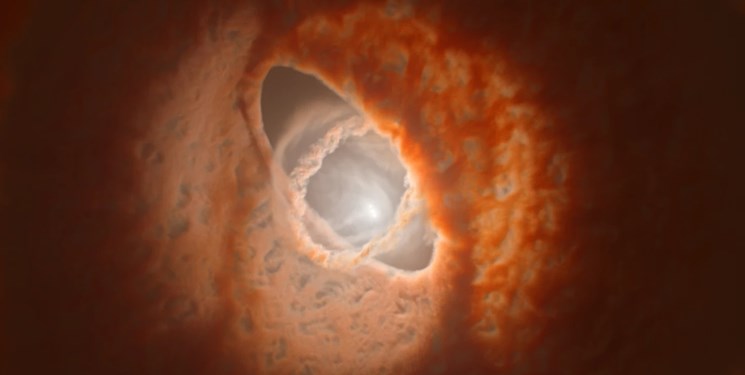 TEHRAN (FNA)- The way things are in our solar system aren't always how they work elsewhere in the universe. Now, astronomers have observed a triple star system that’s warping and splitting its planetary disc into strange new shapes and multiple rings.

It can be easy to assume that the way things are in our solar system are mostly how they are elsewhere in the universe – but that’s often not the case. Now, astronomers have observed a triple star system that’s warping and splitting its planetary disc into strange new shapes and multiple rings.

Here in our solar system, things are surprisingly well-ordered. All of the planets orbit within a fairly flat disc, and so do objects in the asteroid and Kuiper belts. Most other star systems observed by astronomers seem to have similar structures, thanks to the forces of gravity and momentum squishing dust and gas into discs around stars. Later, this all clumps together to form planets and moons.

Now, astronomers have observed a system where this flat disc is being bent out of shape. Known as GW Orionis, the system lies around 1,300 light-years from Earth and contains three stars orbiting each other. The researchers studied GW Orionis for over 11 years using different instruments on the Very Large Telescope (VLT) and ALMA to resolve the structure of the system, and backed it up with computer simulations of what was going on there.

The team found that the two inner stars orbit each other at 1 Astronomical Unit (AU) apart – the same distance between Earth and the Sun. The third star orbits the other two from further out, at a distance of about 8 AU.

The complex gravitational dance between these three stars has split the protoplanetary disc into three separate rings, each with their own orientation. The closest ring is the most out-of-whack, angled almost perpendicular to the rest of the disc. This inner ring contains enough dust to create the equivalent of 30 Earths.

The second ring starts about 185 AU from the center of the system, while the third starts at a distance of 340 AU. That makes it the largest protoplanetary disc observed so far.

So what caused this strange structure? Two separate studies on the system came to two different conclusions. The first team says that the gravitational influences of the three stars is enough to account for it. The second suggests that an unseen planet lurks in the gap between the first and second discs.

“Our simulations show that the gravitational pull from the triple stars alone cannot explain the observed large misalignment,” says Nienke van der Marel, an author of the second study. “We think that the presence of a planet between these rings is needed to explain why the disc was torn apart. This planet has likely carved a dust gap and broken the disc at the location of the current inner and outer rings.”

No doubt astronomers will continue to observe GW Orionis, in the hopes of learning more about this strange system and possibly finding that hypothetical planet. The studies also suggest that other warped protoplanetary discs could be out there.