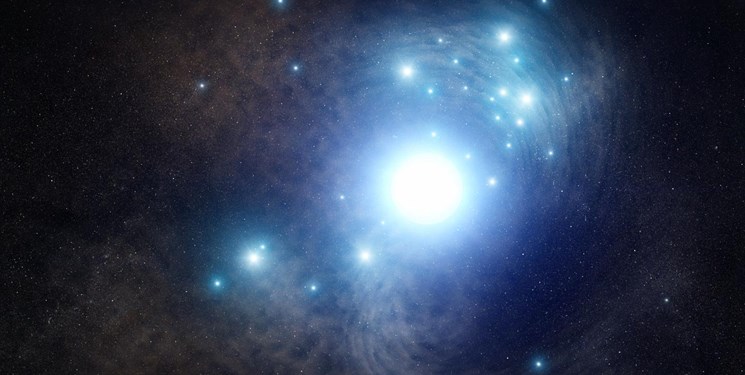 TEHRAN (FNA)- A new theory about the nature of dark matter helps explain why a pair of galaxies about 65 million light-years from Earth contains very little of the mysterious matter, according to a study led by a physicist at the University of California, Riverside.

Dark matter is nonluminous and cannot be seen directly. Thought to make up 85% of matter in the universe, its nature is not well understood. Unlike normal matter, it does not absorb, reflect, or emit light, making it difficult to detect.

Typically, a visible galaxy is hosted by an invisible dark matter halo -- a concentrated clump of material, shaped like a ball, that surrounds the galaxy and is held together by gravitational forces. Recent observations of two ultra-diffuse galaxies, NGC 1052-DF2 and NGC 1052-DF4, show, however, that this pair of galaxies contains very little, if any, dark matter, challenging physicists' understanding of galaxy formation. Astrophysical observations suggest NGC 1052-DF2 and NGC 1052-DF4 are likely satellite galaxies of NGC1052.

"It is commonly thought that dark matter dominates the overall mass in a galaxy," said Hai-Bo Yu, an associate professor of physics and astronomy at UCR, who led the study. "Observations of NGC 1052-DF2 and -DF4 show, however, that the ratio of their dark matter to their stellar masses is about 1, which is 300 times lower than expected. To resolve the discrepancy, we considered that the DF2 and DF4 halos may be losing the majority of their mass through tidal interactions with the massive NGC 1052 galaxy."

Using sophisticated simulations, the UCR-led team reproduced the properties of NGC 1052-DF2 and NGC 1052-DF4 through tidal stripping -- the stripping away of material by galactic tidal forces -- by NGC1052. Because the satellite galaxies cannot hold the stripped mass with their own gravitational forces, it effectively gets added to NGC 1052's mass.

The researchers considered both CDM and SIDM scenarios. Their results, published in Physical Review Letters, indicate SIDM forms dark-matter-deficient galaxies like NGC 1052-DF2 and -DF4 far more favorably than CDM, as the tidal mass loss of the inner halo is more significant and the stellar distribution is more diffuse in SIDM.

The research paper has been selected as an "editors' suggestion" by the journal, an honor that only a select few papers receive each week to promote reading across fields.

Yu explained tidal mass loss could occur in both CDM and SIDM halos. In CDM, the inner halo structure is "stiff" and resilient to tidal stripping, which makes it difficult for a typical CDM halo to lose sufficient inner mass in the tidal field to accommodate observations of NGC 1052-DF2 and -DF4. In contrast, in SIDM, dark matter self-interactions could push dark matter particles from the inner to the outer regions, making the inner halo "fluffier" and enhancing the tidal mass loss accordingly. Further, the stellar distribution becomes more diffuse.

"A typical CDM halo remains too massive in the inner regions even after tidal evolution," Yu said.

Next, the team will perform a more comprehensive study of the NGC 1052 system and explore newly discovered galaxies with novel properties in an effort to better understand the nature of dark matter.

Yu was joined in the study by Daneng Yang and Haipeng An of Tsinghua University in Beijing, China. Yu was supported by grants from the US Department of Energy and the U.S. National Science Foundation.