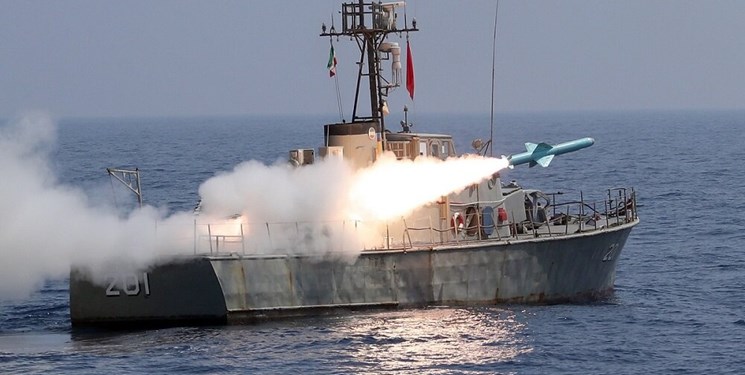 TEHRAN (FNA)- Great Zolfaghar-99 drills wrapped up in waters East of the Strait of Hormuz on Saturday with a parade of surface and subsurface vessels.

The ceremony was held in the presence of Iranian Army Commander Major General Seyed Abdolrahim Mousavi and some of the Iranian Navy’s senior forces as well as observers from Khatam al-Anbiya Defense Base.

A variety of surface and subsurface submarine units of the Navy including destroyers, missile launchers, and submarines of Tariq, Qader and Fateh submarines marched displaying their power to the world.

Aircrafts of the Iranian Army Air Force accompanied the surface and subsurface units.

The Iranian Army's Naval, Ground and Air Defense units kicked off 3-day massive drills in the Southern waters and coasts of the country on Thursday.

The wargames, dubbed Zolfaqar 99, are being staged from East of the Hormuz Strait to the Northern Indian Ocean with an aim of enhancing the security of regional waters and international shipping routes.

The drills started under the command of the Army’s Zolfaqar base, with observers from the Khatam al-Anbiya Air Defense Base in attendance.

The drills covered an area of two million square kilometers in the Eastern waters of the Strait of Hormuz, Makran coast, Oman Sea and North Indian Ocean up to 10 degrees North.

Units of the Army’s Air and Ground Forces contributed to the maneuvers, during which tactical offensive and defensive strategies was drilled in line with the country’s agenda to safeguard its territorial waters and maritime access routes.

Bombing of the hypothetical enemy's targets in the coast was another part of the exercises which was successfully carried out by the Air Force's Phantoms.

Spokesman for the drills said on Thursday the 69th Naval Fleet, including Sahand Destroyer and Bandar Abbas Support Ship, in the Indian Ocean provided intelligence and monitor foreign and enemy vessels.

"As of yesterday, following the announcement of the start of Zolfaqar 99 Military drill, the Air Defense Force warned all foreign drones flying near the exercises site to leave the general area of Zolfaqar drills," said Admiral Irani, adding, "Since then, we have been witnessing a noticeable change in the activities of American drones."

"With continuous naval patrols and monitoring the general area of the exercises in the waters where the exercise takes place, the Air Force and Navy units of the Army, including P3F, F-27 aircraft and reconnaissance drones have warned the trans-regional units to leave the area of Zolfaqar drills," he added.

Stating that during the exercise they witnessed different and focused activities of American drones to collect information from the exercise area, Admiral Irani said, "These activities were discovered by the army's signal recognition systems, and the drones were warned by the air defense."

"They were forced to leave the area after seeing the level of readiness of the surveillance, tracking and defense systems of Iran Army," he added.

Speaking on the eve of the drills on Wednesday, Deputy Commander of the Iranian Army Rear Admiral Habibollah Sayyari announced that Naval forces would start massive drills in the Southern waters of the country on Thursday, adding that home-made submarines and drones would be used in the wargames.

He said that the main phases of the drill would be held with the participation of the Navy, Air Defense, Air Force, and Ground Force units in an area of 2 million square kilometers near the Eastern parts of Hormuz Strait, Makran coasts, Sea of Oman, and North of the Indian Ocean.

“Surface and subsurface vessels, flying units, and part of the equipment and weapons available in the Army Combat Organization are present in this exercises, the most important of which is the powerful presence of home-made Fateh submarine,” Rear Admiral Sayyari said.

He added that the exercises would be held with the motto of ‘sustainable security under defensive authority’, in three different phases of intelligence superiority, tactics, and display of power.

“Among the goals of the wargames are boosting the readiness and military capability in naval, aerial, ground, and air defense fields in joint exercises, and confrontation against the trans-regional threats by practicing operational plans and making sure of their sufficiency in confrontation against any possible aggression,” Rear Admiral Sayyari said.

Among other exercises planned for the wargames are heliborne operations and amphibious operations to take control of targeted coasts, he added.

During the drills, the Iran-made long-range drone named Simorq would take part in combat and offensive operations against enemy vessels, in addition to the reconnaissance missions, and will hit enemy vessels with smart and pin-point bombs, Rear Admiral Sayyari said.