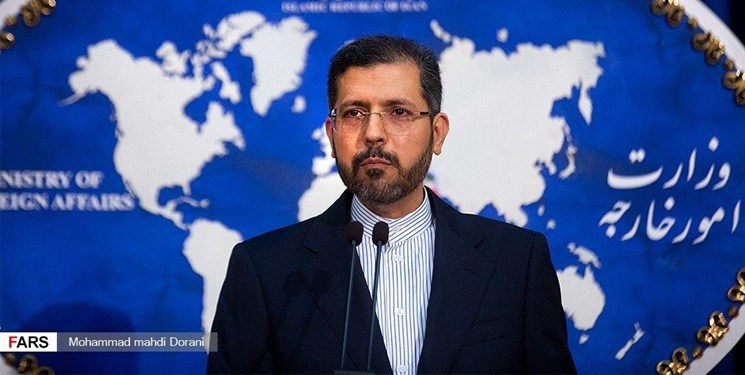 TEHRAN (FNA)- Iran on Monday strongly rejected a report released by the US media claiming that the country was weighing plans to kill the American ambassador to South Africa to take revenge for Washington’s assassination of former Commander of the IRGC Quds Force Lieutenant General Qassem Soleimeni.

“Such baseless remarks are part of the Trump administration’s counter-intelligence campaign against Iran. The US regime’s resort to allegations and lies against Iran on the threshold of the US presidential election and concurrent with its pressures to use the UN Security Council mechanisms with the aim of increasing pressure on the Iranian nation was predictable,” Foreign Ministry Spokesman Saeed Khatibzadeh said on Monday.

He also blasted the US media for releasing an ordered, biased and targeted report against Iran, advising the American officials to give up resorting to repeated and worn-out methods to spread an anti-Iran atmosphere on the international scene.

Khatibzadeh described Iran as a responsible member of the international society which has proved its commitment to the international diplomatic principles and norms, saying that it is the US and the current regime in the White House that has implemented tens of assassination plots and military interventions in other countries in recent years, an instance of which was the assassination of the Islamic Revolution Guards Corps (IRGC) Quds Force Commander Lieutenant General Qassem Soleimani in Iraq.

“As repeatedly said before, the Islamic Republic of Iran will continue legally pursuing the criminal and cowardly assassination of General Soleimani internationally at all levels and will neither forgive nor forget the terrorist act,” he stressed.

His remarks came in response to a report by Politico citing the US officials as claiming that the “Iranian government is weighing an assassination attempt against the American ambassador to South Africa” in retaliation for the assassination of General Soleimeni.

“We only became aware of this report this morning,” Lunga Ngqengelele said by phone on Monday.

Department of International Relations and Cooperation Minister Naledi Pandor may issue a statement later, he added.

On January 8, the IRGC Aerospace Force started heavy ballistic missile attacks on US Ein Al-Assad airbase in Southwestern Iraq near the border with Syria and a US operated airbase in Erbil in retaliation for the US assassination of ant General Qassem Soleimani.