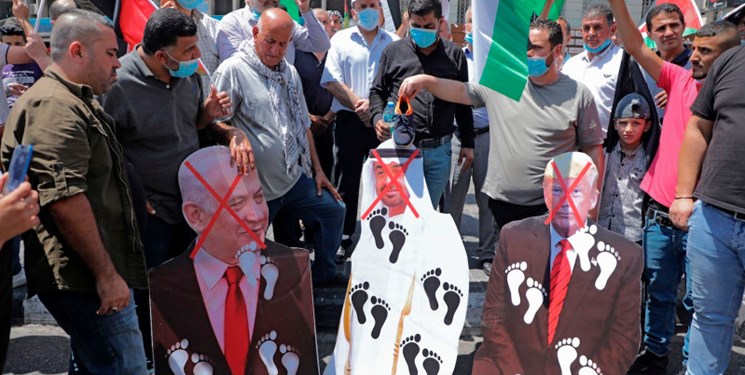 TEHRAN (FNA)- After decades of back channel relations, the foreign ministers of the United Arab Emirates and Bahrain have signed diplomatic normalization deals with the Zionist regime of Israel at a ceremony at the White House.

The shameful agreements, details of which are still being negotiated, represent the first time in a quarter of a century that any Arab country has openly given diplomatic recognition to the usurper regime. Jordan and Egypt signed deals with Israel in 1994 and 1979 respectively.

The deals will see the opening of embassies, as well as flights, tourism and trade links. Security ties are also expected to be put in place quickly, with the possible sale of Israeli fighter jets to the Arab nations. Expect them to be used in the bombing of the people of Yemen, though.

Indeed, the deals are a desperate attempt to repackage Jarred Kushner’s string of failures and Donald Trump’s obsession for a pseudo achievement ahead of a difficult election in November.

This is because the UAE and Bahrain have had back channels with Israel for decades. In October 2018, the Israeli minister of culture, who insults Islamic beliefs on a daily basis, was welcomed in Abu Dhabi, toured Sheikh Zayed Mosque, and Israel’s national anthem played in the UAE capital.

In June 2019, on the side of Kushner’s botched "deal of the century" peace conference in Manama, Israeli journalists posed openly next to landmarks around the Bahraini capital.

As well, the same thing that gave Kushner an advantage in the world’s financial capital was in itself the very reason for his abject failure in brokering peace between Palestine and Israel. Ironically, however, the same had led to the superficial success in the normalization of relation between the two Arab states and Israel.

In the first instance, Kushner flunked the test. He failed for employing New York techniques and misconstruing the seventy years conflict for an opportunity to coerce the economically distressed Palestinians to accept a bad deal.

Moreover, Kushner and David Friedman are major donors subsidizing illegal settlements over the same occupied Palestinian land slated for negotiation in their peace plan. Besides the conflict of interest, Kushner and company are ideologically incapable of being objective intermediaries.

On the second, his approach succeeded because his Arab counterparts were susceptible to Washington’s pressure and had much deficit to reconcile with the Trump administration. They had to help Trump win the election, anyhow.

Last but not the least, unlike previous US presidents, Trump keeps telling the Arab regimes that America’s protection is the only legitimacy they have to maintain their illegal rules. In October 2018 at a campaign stop, Trump addressed the Saudi King, "You might not be there for two weeks without us."

Following the CIA conclusion that Saudi Crown Prince, Mohamed bin Salman, had ordered the murder and dismemberment of Washington Post columnist Jamal Khashoggi, Trump shared a practical example of his role when he bragged how he saved the Saudi Crown Prince "ass."

All this and more are the reasons why the Arab countries had to settle for a payback with the Trump regime and his pro-Zionist diplomats. So, they went for a bogus compromise deal with Israel to make sure Trump wouldn’t blame them if he is not re-elected in November, or worse, target them for winning the election and not helping him win in the first place.

In a nutshell, the bogus normalization deals with Israel are supposed to appease Trump and boost his chance of re-election. They were not signed to ensure peace and security in the region. Nor were they signed at the White House to support the Palestinian cause for freedom and self-determination, let alone peace.

The Arab regimes first had the US administration to bully, blackmail and push them around at any given opportunity. With a bogus normalization deal, they can rest assured that the Zionists would be doing the exact same thing to them from now on.