AEOI Chief: Multilateralism in Danger by US' Destructive Policies 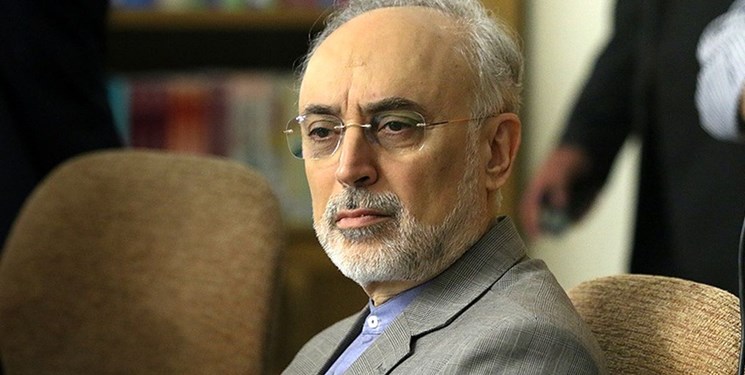 TEHRAN (FNA)- Head of the Atomic Energy Organization of Iran (AEOI) Ali Akbar Salehi underlined the need for the global community to stand against the US bullying, reiterating that ending Washington's destructive behavior is necessary to protect multilateralism.

"There is no way but to get united and put an end to the destructive behavior of the current US administration for the interests of all of us in the international community," Salehi said today, addressing the AEOI's Board of Governors' meeting.

The full text of Salehi's speech addressing the AEOI's Board of Governors is as follows:

The world is enduring very serious and unique circumstances caused by the pandemic COVID-19, which has practically required many fora and organizations, including the Agency, to change their modus-operandi. In view of this, it is a distinct pleasure for me to virtually join the 64th session of the General Conference of the Agency.

Amidst such a unique gloomy and painful environment wherein almost all Members of the Agency have suffered one way or another from the COVID-19, the international community could not witness the tattering of another thread of multilateralism, namely the architecture of the United Nations. It is no secret that international organizations are under political pressures from certain States, and the IAEA is of no exception. At this critical point in time for multilateralism, on the one hand, the raison d'être of the United Nations System has come under serious question; and on the other hand, the International Atomic Energy Agency is facing a very serious challenge of its kind since its inception.

I am proud to say that the international community has successfully passed the first phase of this dire ordeal; the UN Security Council members in New York have rightly shown that they are not willing to compromise on the achievements simply because of the intimidation approach of one specific Member State. 13 out of 15 members of the Security Council not only unanimously rejected the US Resolution on the extension of the arms embargo against Iran but also didn’t recognize the US as a JCPOA participant to use specific mechanisms of the Deal to bring back Council’s already terminated sanctions. That is a real asset that should be preserved.

Also, here in Vienna, the Agency and the Islamic Republic of Iran have shown utmost vigilance in relation to their long term interests with the view that it will be materialized only through mutual cooperation avoiding any outside influence. Thus, within the framework of the safeguards obligations of States under the Comprehensive Safeguards Agreement (CSA) and Additional Protocol (AP), the Agency should show its determination that it will not compromise its impartiality, independence, and professionalism for the sake of short-sighted comforts.

It is worthy to know that Iran, alone, receives 22 percent of the total inspections of the IAEA at the global level, 432 inspections, and 33 complimentary accesses that have also been conducted in Iran in 2019. Furthermore, the Agency has also been able to carry out its verification activities in Iran even during the difficult situation caused by the Covid-19 pandemic. With this transparent and extensive cooperation, Iran and the Agency agreed to work in good faith to resolve three safeguards related questions with an understanding that based on the analysis of information available to the Agency, there will be no other questions or requests for access.

Such approaches taken in New York and in Vienna are the real silver-linings in this gloomy political environment for multilateralism and deserve genuine compliments.

On the current status of the Joint Comprehensive Plan of Action (JCPOA), I would like to say that, while there is still a broad agreement among the international community that the JCPOA should be preserved as the real turning point in the history of multilateralism and as an important achievement of diplomacy, the JCPOA is caught in a quasi-stalemate situation due to the illegal withdrawal of the US from the deal.

Therefore, preservation of the JCPOA is also a common responsibility of all members of the international community. In this context, the responsibility of the EU specifically E3 as members of the JCPOA is of utmost importance, i.e. they must implement their obligations fully and effectively. Thus, the Deal is preserved only when its provisions are implemented in a balanced manner by all parties involved. As a result, Iran has and had no other option rather adopt a step-by-step approach in implementing paragraphs 26 and 36 of the JCPOA to restore the lost balance to the Deal.

Nuclear safety is among Iran’s highest priorities. In doing so, progress has been made in establishing an advanced Nuclear Safety Center (NSC). While the responsibility for nuclear safety and security rests entirely with the Member States, Iran strongly believes that these areas need to be strengthened and enhanced through cooperation between States.

New threats by malicious sides have been observed recently by way of cyber and other technological instruments. In this regard, let me point to the recent explosion at Shahid Ahmadi Roshan (Natanz) Nuclear Facility which was the result of sabotage as already declared. These malicious acts need to be condemned by the Agency and the Member States. Iran reserves its rights to protect its facilities and make necessary reactions to any threat as appropriate.

The Islamic Republic of Iran persists in its path towards the peaceful application of nuclear science and technology in various fields including agriculture, health, and industry while continuing to generate electricity. Here, we reiterate that one of the main missions of the IAEA is “to foster the exchange of scientific and technical cooperation on the peaceful uses of atomic energy” and “to encourage the exchange and training of scientists and experts in the field of peaceful uses of atomic energy” among member states.

One last word of wisdom, the professional, impartial, and independent nature of the work of the Agency would only be guaranteed if the Agency also considers unequivocally and impartially the available information on the nuclear activities of the Kingdom of Saudi Arabia.

If Saudi Arabia is seeking for a peaceful nuclear program, it should act in a very transparent manner and allow the Agency’s inspectors to verify its activities. In this context, the regime of Israel as a non-party to the NPT which has continually and adamantly refused to adhere to the IAEA safeguards requires an unbiased and professional approach by the Agency. This regime which is the main source of instability and insecurity in the region as well as a threat to international peace and security, should abandon its Weapons of Mass Destruction program and accede to the NPT without further delay and precondition.

Needless to say that, clarifications on the nuclear activities and programs in this regard would certainly strengthen the credibility and professionalism of the Agency.

To conclude, the Islamic Republic of Iran is ready to continue its efforts and cooperation with others in the International Community to bring back multilateralism and diplomacy at the center of international relations. To this end, there is no way but to get united and put an end to the destructive behavior of the current United States administration for the interests of all of us in the international community.