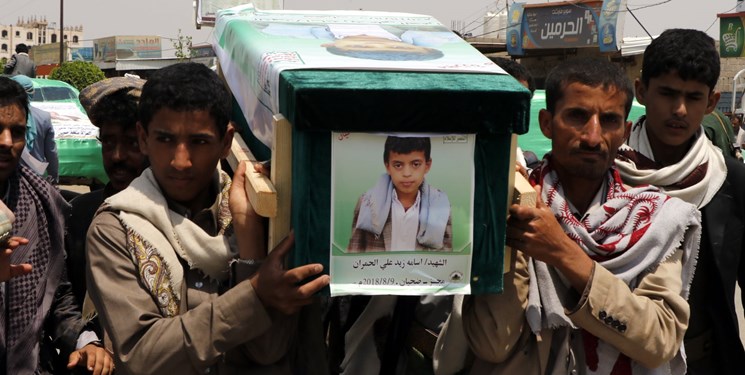 TEHRAN (FNA)- A court of first instance in the Northern Yemeni province of Sa'ada sentenced ten individuals, including US President Donald Trump, Saudi King Salman bin Abdulaziz and his son Crown Prince Mohammad bin Salman (MbS), to death in connection with deadly air raid by the Riyadh-led coalition on a bus carrying tens of students two years ago.

In early August 2018, a bus carrying children in the Dahyan Market in Sa’ada province was hit by an airstrike fired by the Washington-armed and -trained coalition, which is also supported militarily by the UK and several other Western nations.

The assault killed 51 people, including 40 children between 10 and 13 years of age, and wounded 79 others.

The verdict also stipulated obligating the convicts to pay a fine of ten billion dollars to the relatives of the victims.

After the tragic incident, images circulated online, showing pieces of a US-made bomb on the scene. Photos shared by journalist Nasser Arrabyee show pieces of a Raytheon Mark 82 general-purpose free-fall bomb apparently recovered from the scene.

Later, munitions experts told CNN the bomb used by the Saudi-led coalition in the devastating raid on the school bus in Yemen was sold as part of a US State Department-sanctioned arms deal with Saudi Arabia. The bomb was very similar to the one that wreaked devastation in an attack on a funeral hall in Yemen in October 2016 in which 155 people were killed and hundreds more wounded.

The killing of children was condemned by numerous international organizations, with UN Secretary General António Guterres and the UN Security Council urging a credible and transparent investigation of the bloody incident.

The Saudi-led coalition, however, described the attack as “legitimate”, with its spokesman Turki al-Malki even claiming that the strikes “conformed to international and humanitarian laws”.

The Saudi-led coalition has been striking Yemen since March 2015 to restore power to Hadi, a close ally of the kingdom. Despite Riyadh's claims that it is bombing the positions of the Houthi Ansarullah fighters, Saudi bombers are flattening residential areas and civilian infrastructures. The Monarch is the largest end-user of American weapons in the world.

In addition to sale of huge ammount of American military equipment to Riyadh, Washington has provided targeting support for coalition strikes and even mid-air refueling for coalition planes.

Also as a sign of support, Trump in April 2018 vetoed a bipartisan resolution that would have forced an end to American military involvement in Saudi Arabia’s war in Yemen, rejecting an appeal by lawmakers to his own deeply rooted instincts to withdraw the United States from bloody foreign conflicts.

The Armed Conflict Location and Event Data Project (ACLED), a nonprofit conflict-research organization, has estimated that the war in Yemen has claimed more than 100,000 lives over the past five years.

In a report, carried by the Arabic-language al-Masirah television network, Yemen’s Human Rights Center said some 7,200 Yemeni children were either killed or wounded in the imposed war. The center has added that some 5,500,000 Yemeni children are also at the risk of catching diseases due to malnutrition and shortage of health services.