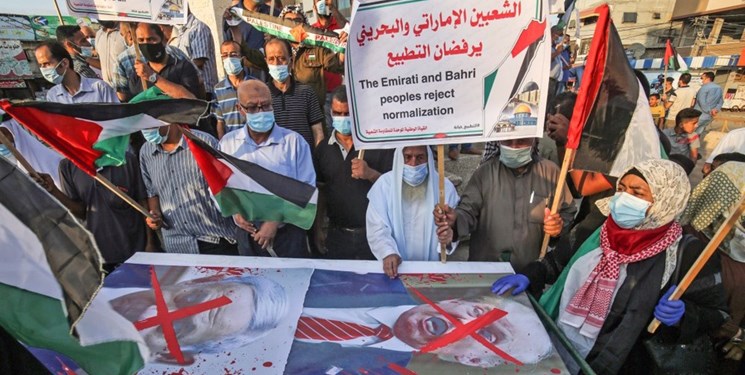 TEHRAN (FNA)- A recent poll conducted by the Arab Center for Research and Policy Studies in Doha showed that an overall 88% of the Arab world population in 13 key nations strongly reject recognition of Israel, revealing that the number stands at as high as 99% in some states.

The poll indicated that Algeria with 99%, Lebanon with 94%, Tunisia and Jordan with 93% rank as the first four nations standing strongly against normalization of ties with the Zionist regime.

The result showed that the nations viewed Israel as the primary threat their country was facing.

When asked whether they would “support or oppose diplomatic recognition of Israel by your country” only respondents in Saudi Arabia and Sudan came in at less than 80 percent for “oppose”.

The survey also shows a strong opposition to Israel among the Perian Gulf Arab staes where 90% of people in both Qatar and Kuwait are against a recognition of Israel. In Saudi Arabia 65% have voiced opposition to Israel, while 29% more have reserved an answer.

In Sudan, an Arab African nation that is under much pressure by the US to recognize Israel, 79% have rejected any recognition of Israel, while just 13% of respondents have agreed to normalization.

Even in the two countries that already recognize Israel – Jordan and Egypt – opposition was very high, at 93 percent and 85 percent, respectively.

The survey results shows that respondents opposing a recognition of Israel are driven by different reasons, including the racist policies of the Zionist regime and continued occupation of the Palestinian lands.

The 2019-2020 Arab Opinion Index was based on face-to-face interviews conducted with 28,000 individual respondents across 13 Arab countries, including Jordan, Palestine, Lebanon, Egypt and Mauritania, between November 2019 and September 2020.

Palestinians, who seek an independent state in the occupied West Bank and Gaza, with East Jerusalem al-Quds as its capital view the deals as betrayal of their cause.

Palestinian President Mahmoud Abbas protested the normalization deals with Israel, saying they will be fruitless as long as the United States and the Israeli regime do not recognize the rights of the Palestinian nation and refuse to resolve the issue of Palestinian refugees.

He reiterated that there will be no peace, security or stability for anyone in the region unless the Israeli regime ended its occupation of Palestinian land, and Palestinians could restore their full rights as stipulated in international resolutions.