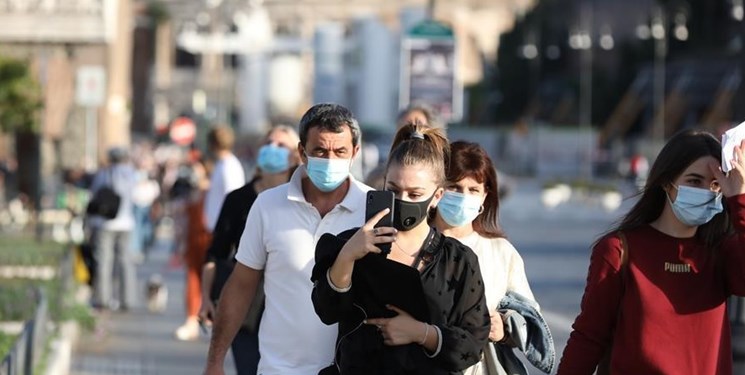 TEHRAN (FNA)- Strict anti-COVID-19 measures including the mandatory use of face masks everywhere will be reintroduced in Italy, starting on Thursday, in an effort to curb a rising trend in infections registered in the latest weeks.

The decision was announced on Wednesday by Prime Minister Giuseppe Conte, after a meeting in which the cabinet passed a specific decree that will keep such rules in place until October 31 at least, Xinhua reported.

Along with the restrictions, the cabinet decided to prolong the state of emergency to January 31, 2021.

First declared on January 31 for six months, and already extended once until October 15, the state of emergency allows the cabinet to act swiftly through decrees. This decision was submitted by Health Minister Roberto Speranza to parliament on Tuesday and approved by a majority of the assembly.

The new decree was conceived in order to "face this phase marked by a rising trend in infections", Conte told a press conference outside the government building.

Starting from Thursday, the use of face masks is mandatory again any time and anywhere outdoor and indoor, such as during the national lockdown, but for private homes or "conditions in which there is a continued state of isolation".

"We made no distinction between indoor and outdoor places, and we have left out (from the rule of mask-wearing) only private places," the prime minister added.

Yet, he explained wearing masks also at home was "strongly recommended" when the family included vulnerable relatives, or when non-live-in people paid a visit.

The rule will not apply to children under the age of six, to people with underlying health conditions incompatible with the use of marks, and to people practicing outdoor sports.

A similar provision imposing the mandatory use of masks outdoors had already been taken at a local level in five regions (Lazio Rome, Campania, Calabria, Basilicata, and Sicily) through September.

According to the World Health Organization (WHO), face masks should be used as part of a comprehensive strategy of measures to suppress COVID-19 transmission and save lives.

Since the beginning of the COVID-19 outbreaks in early 2020, wearing masks in public has been widely accepted in Asian countries like China, South Korea, Japan and Vietnam to limit the spread of COVID-19.

The decree also requires travelers entering Italy from Britain, Belgium, and the Netherlands to undergo a swab test for the coronavirus.

This extends the number of European countries involved in the precautionary screening at the Italian borders. Mandatory COVID-19 swab tests were in fact already introduced for people returning from Greece, Spain, Malta and Croatia since August 12.

On September 21, Italy decided that the testing would also concern those coming from Paris and the other seven areas across France with a high virus circulation rate.

The new decree, however, included no limitation on any working activity, and no hypothesis of lockdown even at a local level.

People found disregarding restrictions would be subjected to fines ranging from 400 euros (471 US dollars) to 1,000 euros, according to the different relevance of the broken rule.

Higher fines (from 500 to 5,000 euros), and a possible jail term from 3 to 18 months, would be imposed on those who test positive for the coronavirus and break the quarantine.