Rick Sterling: US Presence in West Asia against Interest of Locals, Americans 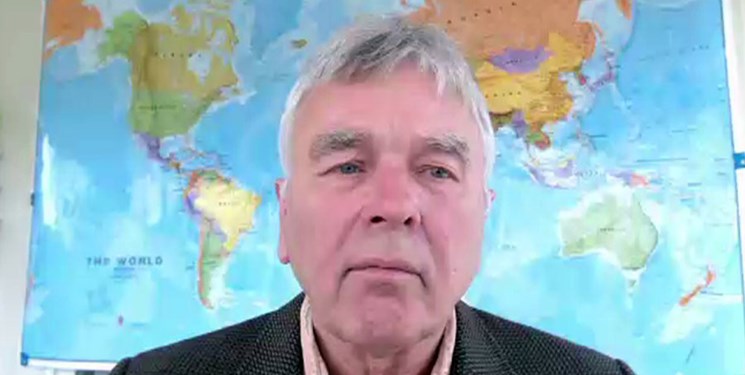 TEHRAN (FNA)- Rick Sterling, independent journalist, says the US military bases in the West Asian region are used as the means of interfering in domestic issues of those countries, against the interests of the American tax-payers.

Speaking in an interview with FNA, Rick Sterling said, “The US bases in the Middle East and Afghanistan are not helping the local populations. On the contrary, they are being used to interfere with and dominate Afghan affairs. US military bases in the [Persian] Gulf are used to prop up reactionary monarchies. The US bases in Syria are being used to loot the oil and prevent Syria from rebuilding and finally defeating the terrorists.”

“The cost of this interference and occupation is born unwittingly by the American public which is paying for an ever-increasing military budget and ever declining US infrastructure and social welfare,” he further added.

Rick Sterling is an independent journalist based in California. He is also a member of the Syria solidarity movement. His writings on international issues, primarily about Syria, are published by various news outlets.

Q: Washington has stationed more than 60,000 troops in the Middle East and Afghanistan. Do you believe it is worth the cost, while the US is not actively at war in these countries?

A:  The US has military bases in more than 80 countries worldwide. They are strategically located around the globe and are hard evidence that the US is a global empire. The US bases in the Middle East and Afghanistan are not helping the local populations. On the contrary, they are being used to interfere with and dominate Afghan affairs. US military bases in the [Persian] Gulf are used to prop up reactionary monarchies. The US bases in Syria are being used to loot the oil and prevent Syria from rebuilding and finally defeating the terrorists.

As a consequence of this interference, people of the region have suffered tremendously. The cost of this interference and occupation is born unwittingly by the American public which is paying for an ever-increasing military budget and ever-declining US infrastructure and social welfare. In 2019, the US spent $52 Billion on Afghanistan military bases and operations. That is much more than was spent on US housing and urban affairs ($43B). In the US today, there are over 560,000 people who do not have homes and sleep in tents or on the street. It is clear that the US military occupation of Afghanistan and other countries in the Middle East is bad for the majority of people in the US and in the Middle East.

Q: The US has deployed its troops from Iraq to oil-rich areas in Syria, despite Donald Trump’s promise to withdraw the US troops from the West Asian region, to lower the cost. Is the contradiction justified?

A: Yes, there is a contradiction between words and deeds. Sometimes a US president is just talking and does not intend to follow through. But there are other times when a US president is over-ruled by the entrenched forces who set parameters on US foreign policy.  For example, there was a critical time in the Syrian conflict in September 2016. President Obama and Secretary of State Kerry had agreed the US air force should start coordinating more closely with the Russian air force to attack ISIS. Instead of doing that, the US air force actively helped ISIS by attacking and killing over 100 Syrian troops near Deir Ezzor! Russian Foreign Minister Lavrov publicly questioned who is running US foreign policy? That action sabotaged and ended the planned collaboration between the Russian and US air forces. Another example: President Trump has tried several times to begin substantial US troop withdrawal from Syria. But this attempted withdrawal was undercut and ultimately stopped by the US military, media and so-called intelligence agencies. Now he has apparently given up and is content to rob the oil from Syria and try to strangle it into submission. With consummate cynicism and hypocrisy, the US foreign policy establishment decries the decline of international order. All the while, they are ignoring and trashing international law in Syria, Venezuela, and with Iran.

Q: Making a longer-than-a-decade long obstacle for peace in Afghanistan, plundering Syrian oil resources, nurturing Daesh (also known as ISIL and ISIS) in Iraq and Syria, and assassination of Iranian Major General Qassem Soleimani, are only a few instances of the outcome of the US military presence in the West Asian region. What is the ultimate goal of the US in keeping its troops there?

A: The US goal is to control the oil-rich region, to prevent other countries such as Russia, China and Iran from having strong influence, and to have bases from which to threaten and undermine those same countries. This US policy goes back to the late 1970's. Afghanistan plays a key part in what Brzezinski called "the grand chessboard" to control Eurasia. This policy is based on the belief in US primacy and supremacy. The result of this "grand chessboard" game has been trillions of dollars wasted, millions of deaths, many millions of refugees and immense destruction.

In the US this is a taboo subject. The establishment does not like to discuss the ongoing occupation because it is so obviously a destructive waste. Whenever there is some specific action, US media turns truth upside down. Thus, most US citizens have been told that Soleimani was a terrorist; they do not know that Iranian General Soleimani was a vital leader in defeating ISIS terrorism in Syria and Iraq.

The lies and distortion continue but are wearing thin. Many US citizens are now skeptical of the misinformation about the Middle East. The US Empire will never achieve its goal of domination; it is cracking and breaking down in the face of the resilience and courage of the people.