Spokesman: Britain’s Debt to Iran Not Related to Zaghari’s Case 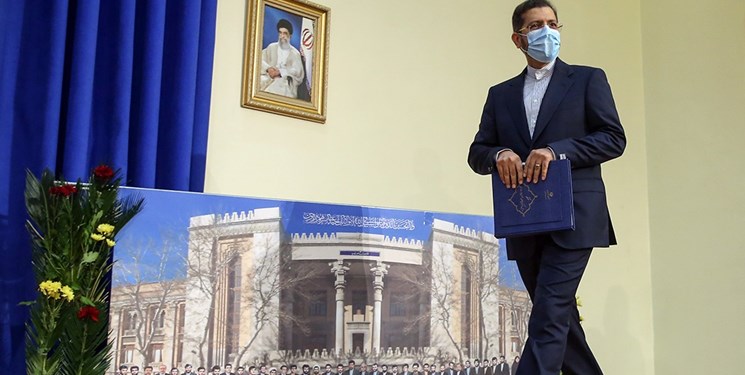 TEHRAN (FNA)- Iranian Foreign Ministry Spokesman Saeed Khatibzadeh said that payment of Iran’s debt by the British government has nothing to do with the case of Nazanin Zaghari-Ratcliffe, an Iranian national who has been jailed in Tehran for spying.

“Britain has a proved debt to Iran and it increases every day that London delays its repayment. Britain should pay the debt and it is not related to other cases, including the prisoners,” Khatibzadeh told reporters in a press conference in Tehran on Monday.

He dismissed any relations between Britain’s debt and Zaghari-Ratcliffe’s case, saying that she has been sentenced by the Iranian judiciary, which acts independently, and she is serving her sentence and has now been granted furlough because of coronavirus outbreak in the country and after the Iranian judiciary gave similar furloughs for coronavirus health concerns.

Last month, the British government confirmed the country’s debt to the Islamic Republic of Iran over the purchase of Chieftain tank (before the victory of the Islamic Revolution).

The United Kingdom owes Iran roughly 400 million pounds for Chieftain tanks, which it sold to Tehran in the 1970s but never delivered.

This debt is related to the purchase contract of tanks in 1971 signed by the British Ministry of Defense and the Pahlavi regime according to which the UK was supposed to deliver 1,500 tanks and armored vehicles to Iran.

The UK refused to complete the contract after the Shah was deposed, even though Iran had paid the money fully in advance.

The marathon court battle is meant to enforce an international court order dating back to 2012 awarding Iran £400m over the UK’s government’s non-completion of the contract to provide Iran with Chieftain tanks.

The UK has put nearly £500m into court as a surety for the award, but insists it cannot make the payment, let alone pay any interest accrued since 2008, on the grounds that Iran’s Defense Ministry is a sanctioned entity.

Iran has two major routes left to unlock the cash put into court by the UK. The first is a request to the Treasury’s office of sanctions implementation (OFSI) to accept voluntarily that the £400m can be paid to the Central Bank of Iran and not to Iran’s Defense Ministry. The Central Bank is not an EU-sanctioned entity.

Iran lodged its appeal in writing two years ago, but no ruling has emerged from the OFSI.

Iran is due to seek a UK court judgment in a case set for directing the UK to pay the £400m award into the coffers of the Central Bank. Lawyers for the UK government in court made clear to Justice Phillips that they will resist any requirement to pay the money to the Central Bank either in cash or kind since the ultimate beneficiary will in effect be Ministry of Defense.

Nazanin Zaghari-Ratcliffe, a project manager with the Thomson Reuters Foundation, was arrested in Tehran in April 2016 as she was returning to Britain.

While the British media have claimed that she was arrested after a family visit, former British Foreign Secretary and current Prime Minister Boris Johnson disclosed in remarks to a parliamentary committee that Zaghari-Ratcliffe was "simply teaching people journalism as I understand it" when she was arrested at Tehran airport.