Top Official: Hamas Dismissed US Offer of Negotiations over 'Deal of Century' 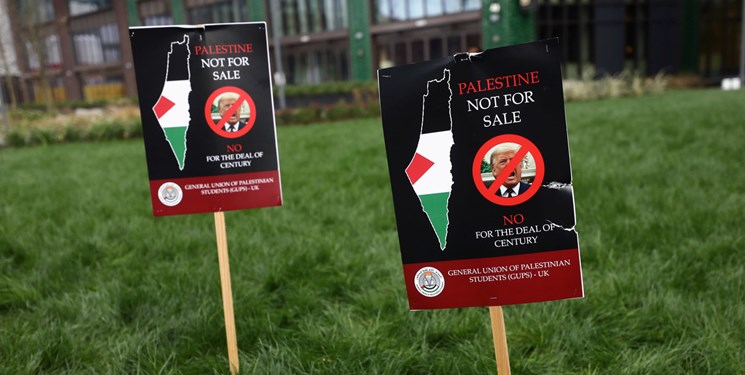 TEHRAN (FNA)- Palestinian Islamic Resistance Movement, Hamas, has turned down an offer by the United States to hold negotiations over President Donald Trump’s highly controversial "Deal of the Century" on the decades-old Israeli-Palestinian conflict, a senior Hamas official said.

“Hamas refused to negotiate with the US government over the Deal of the Century because Washington was trying to exploit the talks in order to threaten the Palestine Liberation Organization (PLO) leadership by provoking divisions among Palestinian factions,” Deputy head of Hamas political bureau, Saleh al-Arouri, stated on Saturday, presstv reported.

“National participation is the only response that can be given to the conspiracy of the Deal of the Century and [bids aimed at] elimination of the Palestinian cause,” he noted.

“It is the occupying Israeli regime that has drawn up the roadmap for the elimination of the Palestinian cause, and the scheme is being implemented by the US government and its allies in the region,” Arouri added.

The deputy head of Hamas political bureau further highlighted that the Tel Aviv regime does not accept any international solution to the Israeli-Palestinian conflict and only wants to destroy the Palestinian issue by any means.

All Palestinian groups have unanimously rejected the so-called Deal of Century that largely meets Israel’s demands in the decades-old conflict while creating a Palestinian state with limited control over its own security and borders.

The deal enshrines Jerusalem al-Quds as “Israel’s undivided capital” and allows the regime to annex settlements in the occupied West Bank and the strategic Jordan Valley. The plan also denies the right of return of Palestinian refugees into their homeland, among other controversial terms.

Arouri also denounced the normalization agreements signed by the United Arab Emirates and Bahrain to establish full diplomatic ties with Israel, saying, “The countries that normalized their relations with the Israeli regime, abandoned [the so-called] Arab Peace Initiative in fact, and facilitated the destruction of the Palestinian cause.”

The so-called Arab Peace Initiative, which was proposed by Saudi Arabia, calls on Israel to agree to a “two-state solution” along the 1967 lines and a “just” solution to the Palestinian refugee issue.

Palestinians, who seek an independent state in the occupied West Bank and Gaza, with East Jerusalem al-Quds as its capital, view the deals as betrayal of their cause.

Palestinian President Mahmoud Abbas protested the normalization deals with Israel, stating they will be fruitless as long as the United States and the Israeli regime do not recognize the rights of the Palestinian nation and refuse to resolve the issue of Palestinian refugees.

Arouri underscored that resistance will never lose as it has proved successful, and that Palestinians will count on the approach in the future.

“We are all moving towards popular resistance... Our national plan for freedom is comprehensive resistance,” the top Hamas official added.