Armenia, Azerbaijan Accuse Each Other of Violating New Ceasefire 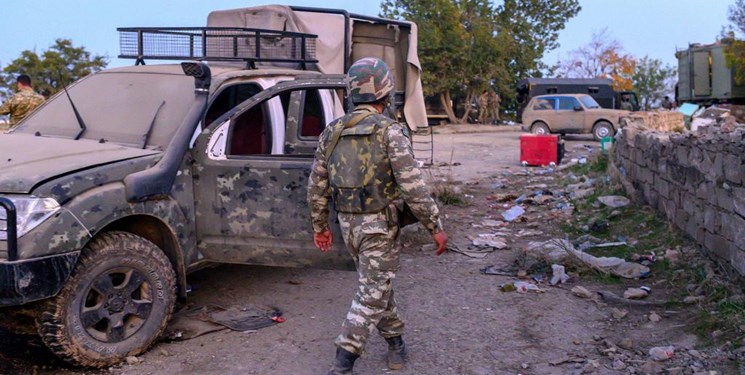 TEHRAN (FNA)- Armenia and Azerbaijan accused each other of violating a new humanitarian ceasefire in fighting over Azerbaijan’s ethnic Armenian-controlled enclave of Nagorno-Karabakh early on Sunday.

The agreement came into force at midnight on Sunday (2000 GMT), Al-Jazeera reported.

Russia and France said they intervened in an attempt to mediate an end to the latest escalation in violence over the disputed region of Nagorno-Karabakh.

Shusan Stepanyan, a spokeswoman for Armenia’s Defence Ministry, said on Twitter that Azerbaijan fired artillery shells and rockets in the early hours of Sunday.

The Azerbaijani Ministry of Defence later accused Armenia of not having observed the ceasefire.

The ceasefire deal, agreed on Saturday, came a week after Russia brokered a truce, which failed to stop the worst fighting in the region in decades, with both warring sides accusing each other of violations.

Russian Foreign Minister Sergey Lavrov called his Armenian and Azeri counterparts in the hours before the announcement, his ministry said, urging both parties to adhere to the deal brokered in Moscow last week.

France also put out a statement after Saturday’s announcement, saying it followed “French mediation … in co-ordination with the co-chairs of the Minsk Group (Russia and the US)”.

The statement from the Elysee Palace also called on both sides to “strictly” respect the truce, adding that “France will pay great attention to that and will remain engaged for a lasting end to hostilities and a quick start of credible negotiations”.

The truce announcement came hours after Azerbaijan accused Armenia of perpetrating a war crime during a missile attack on its second city of Ganja, a charge echoed by ally Turkey.

Armenia denied responsibility for the attack, which left 13 civilians – including two children – dead and dozens wounded.

Images distributed by Azerbaijan showed rescue workers looking for survivors under destroyed houses, including the use of sniffer dogs. The authorities spoke of considerable damage.

The EU on Saturday condemned the attacks on Ganja and said the original ceasefire deal “must be fully respected without delay”.

“All targeting of civilians and civilian installations by either party must stop,” said a spokesperson for EU foreign affairs chief Josep Borrell.

Armenia, for its part, reported rocket attacks by Azerbaijan, including on the main city of Nagorno-Karabakh, Stepanakert, wounding at least three civilians.

On Twitter, Armenian authorities described as “misinformation” a claim from Azerbaijan that it had downed an Armenian Su-25 aircraft over the region of Jebrail, which borders Nagorno-Karabakh.

Azerbaijan’s Defence Ministry earlier said it had made further gains on the front line, bringing several villages and a city under its control.

The contested Nagorno-Karabakh region, a mountainous and heavily forested patch of land, is at the heart of a decades-long armed standoff between neighbours Armenia and Azerbaijan.

Home to some 145,000 people, Nagorno-Karabakh is controlled by ethnic Armenians backed by the Republic of Armenia, but is recognised as part of Azerbaijan under international law.

Azerbaijan lost control of the area in a war that followed the collapse of the Soviet Union some 30 years ago. A fragile ceasefire had been in place since 1994.

Thousands of people have fled the region, predominantly inhabited by ethnic Armenians, since fighting flared up again on September 27.

The Armenian Defence Ministry said that more than 600 soldiers had been killed since then.

Azerbaijan has so far not provided any information on losses in its armed forces but it says that more than 50 civilians were killed in Armenian attacks.

Al- Jazeera’s Bernard Smith, reporting from Yerevan, the Armenian capital, said it was Armenia that had pushed for the latest ceasefire.

The Armenian government was under enormous pressure because of the large number of casualties, as well as the loss of territory, he explained.

“The Azeris have taken, as we understand, territory that is essentially in the buffer zone between Nagorno-Karabakh and Azerbaijan. This is territory that Armenia has controlled since the 1994 ceasefire. Armenia considers it a buffer zone, a security zone, but it is Azeri territory. And for the last 26 years at least, both sides were supposed to have been negotiating the future of this territory as well as Nagorno-Karabakh,” said Smith.

“The Azeris say after 26 years, nothing has been done, there has been no solution, as to what to do with this territory, and so with Turkey’s support, they’ve been moving militarily. And they’ve succeeded in taking territory. Hence, the Armenians’ enthusiasm to push for a ceasefire,” he said.