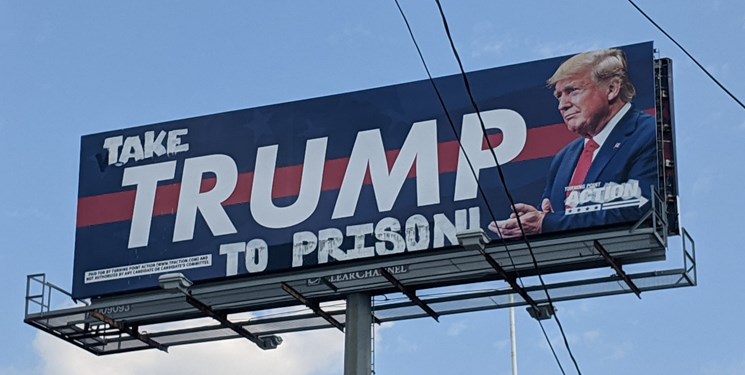 TEHRAN (FNA)- A billboard showing support for the American president in the Texas city of Houston has been defaced to read "take Donald Trump to Prison".

A photo of the sign was tweeted out by Houston-based lawyer Rogelio Garcia, who states the original was put up in a part of the city with a large Hispanic population several days ago, Newsweek reported.

"So Trump drops a big (approx 40x60 feet) expensive political sign in my largely Hispanic neighborhood in Houston TX about a week ago which upset me .... I wake up this morning and this is what the sign looks like now hahahahah," Garcia tweeted, adding, "I promise you folks I had nothing to do with this... however I wish I had."

The post has since been retweeted more than 10,000 times.

A group called Turn Texas Blue have since claimed responsibility for vandalizing the sign, stating, "Trump put up a billboard in Houston last week. We fixed it."

Turn Texas Blue also claimed they were responsible for changing graffiti across a highway from "be somebody" to "vote or die".

The group also shared a TikTok video showing someone driving by the defaced Trump sign with the caption "this b***h tried to put up a billboard in Houston, TX".

With less than three weeks until the election, the state of Texas is shaping up to be one of the potential key swing states despite being a GOP stronghold for the past four decades.

In the 2016 election, Trump beat Hilary Clinton in Texas by a nine percent margin. Despite still leading in a majority of polls, Trump's margin has been drastically cut against 2020 rival Joe Biden.

A recent Morning Consult poll revealed Trump's lead is just two points, with 49 percent for the president and 47 percent for Biden.

According to an average of state polls compiled by FiveThirtyEight, Trump currently has a 1.5-percent overall lead over Biden in Texas, compared to 4.1 percent in April 2020.

Former Texas congressman Beto O'Rourke is one of those who believe Biden could become the first Democratic candidate Texas chooses since Jimmy Carter in 1976.

"If Texans continue to smash voting records, Joe Biden will win Texas & the election will be over ON ELECTION NIGHT," O'Rourke tweeted on Tuesday, adding, "No waiting days (weeks?) to count votes in Pennsylvania. If you want to destroy any chance Trump has to win or steal this election, then focus on Texas."

There are 38 Electoral College votes up for grabs in Texas, meaning it would represent a significant boost to Biden's chances of becoming president if he were to flip the state blue in November.