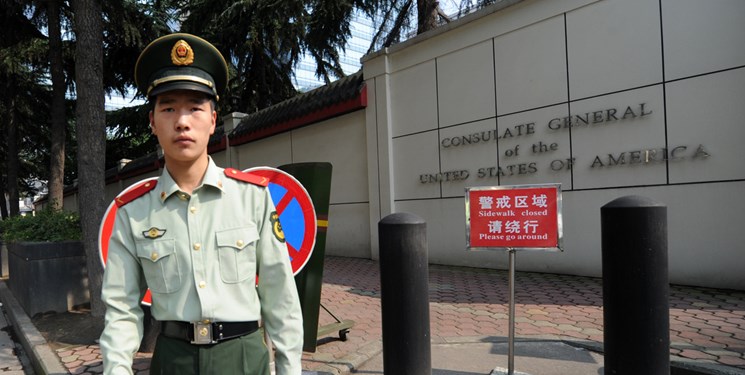 TEHRAN (FNA)- The Chinese government has repeatedly warned American officials that they could possibly detain United States nationals in China due to the Justice Department’s prosecution of Chinese military-affiliated scholars, people familiar with the matter told The Wall Street Journal.

The sources said that the message, which has been issued through the US Embassy in Beijing and multiple other channels, says that until US officials drop charges against the scholars, Chinese officials may arrest Americans currently residing in the country.

According to The Journal, the sources confirmed that over the summer, the US began detaining Chinese scientists conducting research at American universities over charges of concealing to US immigration authorities their active duty statuses with the People’s Liberation Army.

The Journal had reported on the arrests in August, along with allegations from US officials that Chinese diplomats were using these scientists as part of an intelligence-gathering scheme.

After the arrests, China closed its Houston consulate in July and removed the remaining military scientists who were in the US.

In response to a request for comment from The Hill, a State Department spokesperson did not directly address the recent reported threats made by Chinese officials. However they stated the department warns, “US citizens traveling to China about the arbitrary enforcement of local laws, in particular, the exit bans imposed on US citizens.”

The spokesperson continued to say that on the State Department’s website, the agency warns “US citizens that business disputes, court orders to pay a settlement, or government investigations into both criminal and civil issues may result in an exit ban which will prohibit your departure from China until the issue is resolved”.

“Even individuals and their family members who are not directly involved, or even aware of these proceedings, can be subject to an exit ban,” the spokesperson added in the statement.

The news is just the latest development that adds to the United States' tense relationship with China amid the coronavirus pandemic. President Donald Trump has repeatedly blamed China for the outbreak and its fallout, as the virus is believed to have originated in Wuhan, China.

Before the virus outbreak, both countries were locked in a bitter trading war, with Trump at one point threatening to impose tariffs on the country if he and Chinese leader Xi Jinping were not able to make a deal.

The State Department most recently updated its travel advisories for China and Hong Kong on September 14, saying that it was now urging US citizens to reconsider travel to these areas “due to COVID-19 and risk due to arbitrary enforcement of local laws”.

The September advisory also warned that Chinese government officials may detain citizens of other countries “to gain bargaining leverage over foreign governments”.

John Demers, head of the Justice Department’s national security division, told The Journal that the agency was “aware that the Chinese government has, in other instances, detained American, Canadian and other individuals without legal basis to retaliate against lawful prosecutions and to exert pressure on their governments, with a callous disregard of the individuals involved”.

According to the news outlet, Demers declined to comment on the specifics of the alleged Chinese threats made in connection to the US cases against the researchers, but added that “if China wants to be seen as one of the world’s leading nations, it should respect the rule of law and stop taking hostages”.

In September, federal prosecutors dropped charges against a visiting Chinese scientist at the University of Virginia who had been accused of stealing trade secrets from his professor.

A federal prosecutor noted at a hearing in Chicago, where Hu Haizhou was arrested, that further investigation determined “some portion” of the material allegedly found on his computer was “in a shared space that Mr. Hu had authorized access” to, according to a transcript obtained by the Journal.

As a result, the prosecutors filed a motion to dismiss all charges, which the court later accepted.