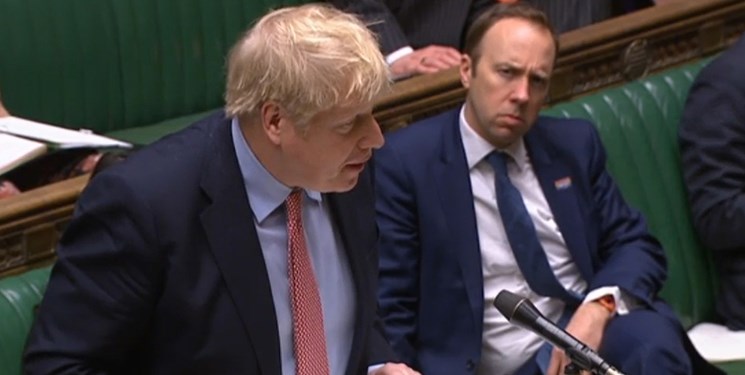 TEHRAN (FNA)- British voters do not trust Prime Minister Boris Johnson and his Health Secretary Matt Hancock to beat coronavirus, according to a new survey – and less than a quarter (22 percent) think it would be reasonable for ministers to expect them to keep obeying restrictions on their social and economic lives beyond the spring.

The poll by BMG Research for The Independent laid bare the extent of financial hardship caused by the COVID-19 pandemic and the lockdown measures imposed by the government to fight it.

More than a quarter of those questioned (26 percent) said that their household incomes had gone down as a result of the outbreak.

And some 3.4 percent – the equivalent of more than 900,000 families or sole-person households – said their income had fallen by more than half.

The poll of 1,500 people was conducted as Johnson struggled to maintain his grip on his regional coronavirus policy, with councils in the north rejecting his efforts to tighten local restrictions and Labour’s Keir Starmer demanding a national “circuit-breaker” lockdown.

It found that just 36 percent now trust the prime minister to lead the response to the pandemic, against 44 per who do not – an overall rating of -8. For Hancock, the figures were more damning, with a trust rating of -13 based on just 26 percent trusting him and 39 percent expressing distrust.

The most trusted politician was Chancellor Rishi Sunak, whose +19 rating of 44 percent trust compared to 23 percent distrust was no doubt buoyed by his role handing out close to £200bn in state support, including a furlough scheme paying up to 80 percent of wages for employees unable to work.

The figure with lowest public credibility on dealing with coronavirus was US president Donald Trump, with just 11 percent of Britons saying they trusted him on the issue, against 73 percent who did not.

There was little sign of optimism for an improvement to families’ financial position in the near future, with 25 percent of those questioned saying that they expect their household income to decline further over the next six months. The period will see the replacement of Sunak’s furlough scheme in November with a less generous system paying 22 percent of wages – or 67 percent for firms forced to close in tier 3 COVID alert areas.

And it will see the withdrawal in April of the £20-a-week temporary uplift to universal credit and working tax credit provided to help benefit claimants weather the coronavirus storm.

The poll found that those most likely to lose out financially due to coronavirus were 25- to 34-year-olds – those most likely to be bringing up small children – among whom 36 percent said their household income had fallen, against just 10 percent who said it had gone up. By contrast, just 8 percent of over-65s reported financial loss.

Ethnic minority households were far more likely to report that they had lost income (35 percent) than white British (24 percent).

The director of policy at the Child Poverty Action Group, Louisa McGeehan, stated the poll’s findings reflected the group’s own experience of families with children suffering money woes.

“As these figures suggest, parents of young children are more likely to be struggling due to falling incomes, lack of childcare and the additional costs of raising children,” McGeehan told The Independent.

“Our own research found that eight in 10 hard-up families are financially worse-off as a result of the pandemic. Despite this, there has been no financial support from the government specifically targeted at families with children,” she added.

Removing the benefit uplift in the spring “makes no sense”, noted McGeehan, calling instead for a £10 weekly increase in child benefit to help protect children from hardship.

And Emma Revie, chief executive of foodbank charity the Trussell Trust, announced, “It is shocking how many people have seen their incomes fall during the pandemic", adding, “This has led several thousands of people to be forced to use a food bank for the first time. This is not right."

“Our own research forecasts that if we don’t take action as a nation, our network of food banks will be giving out six food parcels a minute this winter," she continued.

“But it doesn’t have to be like this. This year we’ve seen the power of what happens when we stand together in the face of adversity. That is why we’re urging the government to preserve the lifelines that have saved many of us from destitution through this pandemic,” she added.

Among the 26 percent reporting a blow to their finances, around one in six (16 percent) said their household income had fallen by less than 10 percent, a quarter (25 percent) said it was down by 10-19 percent, a further 22 percent had taken a hit of 20-29 percent in their income, 10 percent had lost 30-39 percent, and 7 percent had lost 40-49 percent. But a staggering 13 percent of this group – equivalent to 3.4 percent of the population – said that the money coming into their home was down by more than 50 percent as a result of the pandemic.

The poll found that 49 percent of voters believe that the government is right to prioritise limiting the number of deaths caused by the disease, while 30 percent say limiting the damage to jobs and the economy should come first.

But it also indicated that Britons’ patience may soon run out for the lockdown restrictions which have forced them to stay in their homes, give up visits to pubs and restaurants and limit socialising with friends and family.

A clear majority (65 percent) said it was “reasonable” for the current restrictions in their area to continue until Christmas, against just 19 percent who said it was not.

That majority fell if the restrictions were extended to the spring of 2021 – as Johnson has suggested they might – with 46 percent saying this would be reasonable and 34 percent unreasonable.

But beyond this date, support for continued measures drops off a cliff, with 51 percent saying it would be unreasonable to carry on to the end of 2021 and 59 percent into 2022, even if no vaccine or effective treatment is found.

Only a hardcore 13 percent of lockdown accepters said that it would be reasonable to keep measures going into 2022, and these people appear ready to maintain them almost indefinitely, as virtually the same proportion were happy to continue into 2023.

BMG head of polling Robert Struthers stated, “Boris Johnson’s own personal ratings strengthened as the first wave of the pandemic hit the UK back in February and March of this year."

“Now, as the second wave of the virus takes hold, it appears public trust has slipped away," he continued, adding, “The collapse in trust will likely worry those working across government, as the prime minister tries to reassure the public that the new measures introduced over the past week will be enough to halt the spread.”

Struthers questioned whether Sunak’s popularity would survive the planned rollback of his support schemes.

“You might expect the trust ratings of the chancellor and prime minister to be closely aligned given how closely they will be working together at the top of government,” he noted.

“However, this polling clearly shows that the public rate the chancellor’s performance and ability to hand the virus effectively – up until now at least – much more highly," he announced, adding, “However, as the second wave takes hold and economic support packages become more targeted and less generous, whether this trend continues is another matter entirely.”