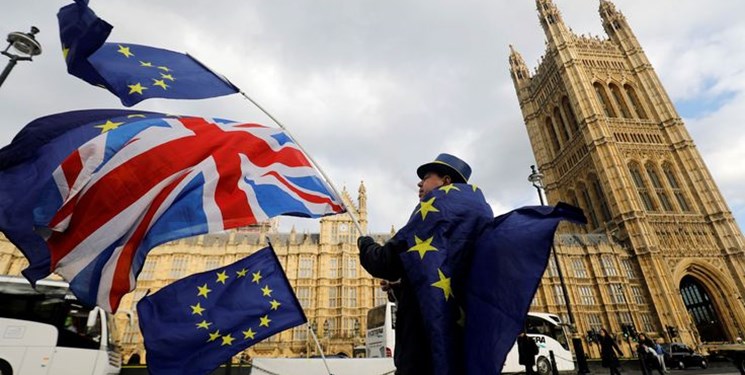 TEHRAN (FNA)- The narrow EU deal sought by Prime Minister Boris Johnson will act as a “dead weight” on Britain’s ability to trade, the former boss of the Brexit department warned, amid rising concerns that the country remains dangerously ill prepared for such an outcome.

Negotiations with the EU remained stuck this weekend after Downing Street told EU negotiators not to bother making a planned trip to London without offering a “fundamental change of approach”. The prime minister stopped short of calling off talks, which will continue this week. In a sign of the severity of business unease, more than 70 trade associations and professional bodies today issue an extraordinary joint plea to both sides to carve out a deal, The Guardian reported.

However, there are concerns within government and industry that the dire threat of a no-deal outcome has masked the impact of a “thin” EU deal on trade. While a deal will remove tariffs on trade, significant “non-tariff barriers” will be imposed, adding serious costs on manufacturers and practical difficulties for hauliers – while the UK’s large services sector is also expected to be subject to new barriers.

Philip Rycroft, who ran the Brexit department until last year, stated that negotiators were essentially hammering out “the extent of new barriers to trade”.

“No deal is certainly worse than a deal, but it is just worth remembering – customs declarations, security declarations, regulatory checks, rules of origin, compliance – all of the panoply of a border applies if we get the deal,” he continued, adding, “The change that happens at the end of this year, either way, is a massive logistical challenge and a very expensive one.

“You have the short-term impact, but then you have a dead weight on trade for ever, because that’s the nature of being out of the [EU’s] single market. It puts friction into our trading relationship with the EU – that friction equals cost. It will change the nature of the trade relationship between the UK and the EU. If you believe in free trade, that’s clearly not a good thing,” he stated.

Talks held last week between the Cabinet Office and industry figures saw both sides express concerns over readiness for the changes due in January. Industry disquiet also remains around the readiness of a new border computer system, as well as the impact on sectors such as financial, legal and business services.

Ben Fletcher, executive director of policy at Make UK, said even the best deal now on offer was “a long way from the kind of deal that was being discussed as a starting point during Theresa May’s discussions – which itself was a very long way away from the status quo”.

“Across the big business sectors there is a real nervousness that too many firms think that the potential deal is actually largely the status quo – there is a dangerous underlying belief that ultimately, someone will emerge from a building in Brussels with a deal and things will carry on as normal. There are real fears that the hidden shock here is that the scale of change, from where we sit today to where we might sit even with a deal on January 1, is pretty significant – and pretty scary,” Fletcher added.

Some in industry said they were reluctant to raise concerns about the potential deal because no deal was the immediate threat.

Anand Menon, director of The UK in a Changing Europe, stated, “One of the things the current furore over deal v no deal serves to disguise is the fact that even if there is a deal, it will be a relatively ‘thin’ one which will lead to potentially serious disruption and have a significant impact on the economy.”

No deal remains a danger because talks have stalled over fishing rights in British waters and so-called level playing field (LPF) rules in relation to Britain’s future use of state aid. Industry sources announced they expected shortages in supermarkets to force the UK back to the negotiating table in the event of no deal.

Nick Macpherson, the Treasury’s top civil servant from 2005 to 2016, noted the UK government would have little choice.

“The deal on offer will cause economic damage since there will still be friction at the border which will discourage trade with our biggest market,” he continued, adding, “But no deal would do much more harm, in particular to manufacturing industries such as cars and chemicals and would make Britain’s return to the negotiating table at some point inevitable.”

“The [EU] aim would be to force the British side back to the table. But as LPF conditionality would still be on the table for any negotiation after a no deal, I find it hard to see how Johnson could go back to the table when the terms from the other side were clearly unchanged. He is now boxed in. No deal has, for many years, been a substantial risk – not least because, for so many on the right, it was always the objective, and the ‘only true’ Brexit. If we go that route, it is in the EU’s strategic interests to make it rough. And they would,” Rogers stated.