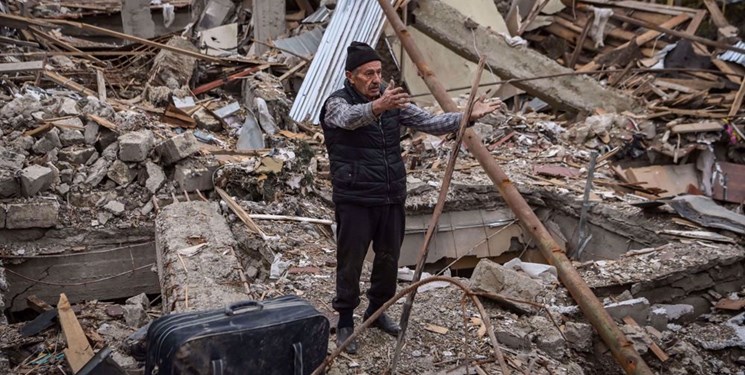 The two Caucasian neighbors agreed to a "humanitarian ceasefire" after a Russian-brokered truce failed to stop the worst fighting in decades in the region, which broke out late in September, presstv reported.

Azerbaijan said Sunday Armenia-backed separatists had fired at Jabrayil city which it retook from Armenian forces Friday as well as villages around it, using mortars and artillery overnight.

The defense ministry said the Azeri army “took adequate retaliatory measures”, and that “there are no casualties among the personnel.”

“Using artillery fire, the enemy launched an offensive in the southern direction, with the aim of taking advantageous positions,” the Ministry's Spokeswoman Shushan Stepanyan said.

“Both sides have suffered losses," Stepanyan wrote on Facebook.

The separatist ombudsman in Karabakh also said Azeri forces had launched an attack on the region’s military positions and there were casualties and wounded on both sides.

The self-proclaimed defense ministry of the region said on Sunday it had recorded another 40 casualties among its fighters, pushing the overall death toll to 673 since fighting with Azeri forces erupted on September 27.

Meanwhile, an adviser to the separatist leader of Karabakh said Sunday the current ceasefire was “indefinite”.

David Babayan said that “although some Azerbaijani officials claim that it has been declared for several days…this truce is indefinite”.

He said the ceasefire holds in some parts of the region, “but there are areas where the Azerbaijani armed forces are trying to break the defense of Karabakh”.

“I think the enemy will continue active actions in some areas," he added.

Russia’s Sputnik news agency, however, said the region’s main city of Khankendi which Armenians call Stepanakert had a rather calm night and no air raid sirens were heard during the night.

According to the agency, representatives of humanitarian organizations arrived in Khankendi overnight to help the two sides exchange prisoners.

The new truce came amid Azerbaijan's advances on the battlefield and an escalation in attacks on cities, including an Armenian missile attack which killed at least 13 people in the second Azeri city of Ganja early Saturday.

As the new truce began, supporters of the two warring sides sought to make their presence felt.

France, which is a staunch supporter of Armenia because of the lobbying power which the Armenian diaspora has in the country, called on both sides to “strictly” respect the agreement.

“France will pay great attention to that and will remain engaged for a lasting end to hostilities and a quick start of credible negotiations,” said the Elysee Palace in a statement.

It said the truce followed “French mediation … in coordination with the co-chairs of the Minsk Group", namely Russia and the United States.

For decades, the group has failed to stop the sporadic outbreaks of fighting and implement United Nations resolutions that demand the "withdrawal of armed forces from the occupied territories".

Azerbaijan, which sees no or little sympathetic voice in the group and views all the three co-chairs biased toward Armenia, wants Turkey included in the negotiations.

On Sunday, Turkish Parliament Speaker Mustafa Sentop was set to start a three-day visit to Azerbaijan in a show of Ankara's support for Baku.

He is expected to meet with Azeri President Ilham Aliyev on Monday and deliver an address to the country's parliament the following day.

Since the fighting broke out, Ankara has pledged its "unwavering" support for Baku. On Saturday, Turkish Foreign Minister Mevlut Cavusoglu said Ankara would “always side with Azerbaijan”.

Karabakh is internationally recognized as part of Azerbaijan, but it is held by ethnic Armenian separatists since 1992 when they declared independence, sparking a war that killed some 30,000 people and forced one million Azeris to flee their homes.