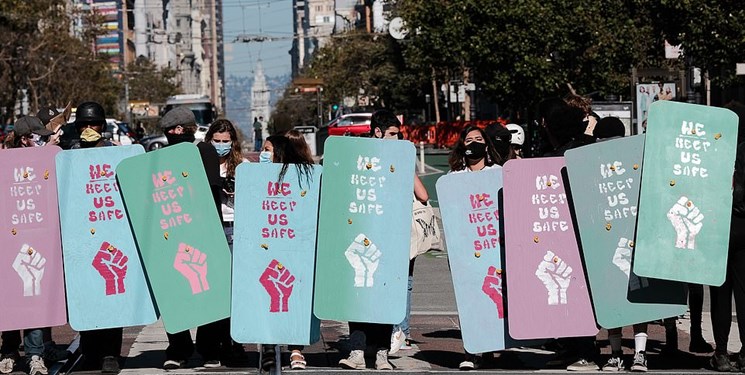 Hundreds of counter-protesters turned up holding Black Lives Matter signs while others were dressed in black clothing with their faces covered and waving flags for violent left-wing group Antifa. Others wore t-shirts claiming membership of the anti-fascist action group 161 Crew.

The Team Save America event ended up being called off before it even started as violent clashes broke out between the two sides within minutes of people arriving, leaving several in need of medical assistance.

The pro-Trump group planned to demonstrate outside the United Nations Plaza before moving to Twitter’s Market Street headquarters.

The small group began assembling outside the plaza around midday where they were greatly outnumbered by counterprotesters who arrived with shields reading "We keep us safe" that they used to then form a wall to prevent the San Francisco police from dispersing their march down Market Street.

Police tried to form a barrier to separate the two sides but fights broke out almost immediately.

He took the stage around 1 pm and was met with plastic water bottles and glass bottles thrown over police barricades at him.

Anderson later posted graphic photos on social media of his bloodied mouth missing a tooth and wrote that 'Antifa attacked me for no reason'.

Another pro-Trump supporter, sporting a Trump 2020 t-shirt, was seen having a drink poured on him by a counterprotester as he cowered on the ground.

He was later seen being wheeled off on a stretcher to an ambulance with his leg in a support.

Another man was seen being attended to by another activist who was pouring water into his eyes to counter the effects of pepper spraw deployed by cops into the crowd. It wasn't clear which group the man was affiliated with.

A man wearing a 161 Crew t-shirt was seen about to punch a demonstrator, while an Antifa flag was seen waving in the background.

Meanwhile, a San Francisco police officer was also seen injured on the ground being tended to by colleagues.

Cops were pouring water in his face after a demonstrator sprayed mace in his face.

One of the officers was taken to a local hospital for treatment.

No arrests have been made.

The event protesting Twitter was canceled, but some people on both sides lingered in the area into the afternoon sparking concerns of more violence to come.

Conservatives have hit out at Twitter accusing it of censorship after the social media giant locked Trump's campaign account.

On Wednesday, Twitter first blocked the New York Post's story that Joe Biden met with Ukrainian businessman Vadym Pozharskyi, an associate of his son Hunter, months before Biden pressured Ukrainian officials to fire a prosecutor who was investigating Pozharskyi's firm.

Twitter and Facebook - which also limited the circulation of the story citing a need to fact check the allegations - were accused of censorship over the move.

Trump threatened to remove the US legal protections - known as Section 230 - that exempts social media platforms from liability for the material users post on their networks.

Twitter CEO Jack Dorsey Wednesday night apologized for the lack of explanation around the social media giant's decision to block the story but stood by the company's move to do so.

Dorsey tweeted that his company's actions had been "unacceptable" and admitted there had been a lack of communication surrounding Twitter's decision.

"Our communication around our actions on the NYPost article was not great. And blocking URL sharing via tweet or DM with zero context as to why we’re blocking: unacceptable," he said.

He then linked to a statement from the company that said it was restricting the link because "personal and private information" had been shared in the story.

Senate Republicans vowed Thursday to subpoena Dorsey to appear before the Judiciary Committee days before election day over Twitter blocking the story.

By Friday, people were free to post the links to the story again because Twitter said the "once-private" information in the article is now "widely available" in the press and on other platforms.

Twitter also announced it will no longer remove hacked material unless it’s directly shared by hackers or those working with them.