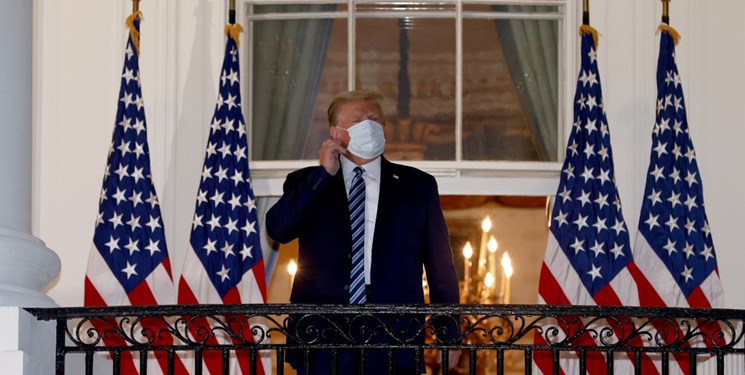 TEHRAN (FNA)- A majority of Americans say they don’t trust what President Donald Trump has said about his health since testing positive for COVID-19 earlier this month, according to new data from the NBC News|SurveyMonkey Weekly Tracking poll.

Fifty-two percent of adults say they don’t trust what Trump has said, while 38 percent say they do trust what the president has reported on his health, NBC News reported.

Trump announced that he tested positive for the coronavirus on October 2 — however, neither the president nor anyone in the White House or campaign has announced when the president last tested negative prior to that date. White House physician Dr. Sean Conley stated on October 12 that the president had tested “negative” for the virus on consecutive days and was no longer a transmission risk.

When asked by NBC’s Savannah Guthrie last week to disclose the last time he tested negative, a detail that could help narrow down the window when the president could transmit the virus, Trump noted he didn’t know or remember.

“I don’t know, I don’t even remember. I test all the time. But I can tell you this, after the debate, I guess a day or so, I think it was Thursday evening, maybe even late Thursday evening, I tested positive,” Trump added.

Trump and Democratic presidential nominee Joe Biden were required to tell the Commission on Presidential Debates that they tested negative prior to the debate on September 29 — and will be asked to do the same for the final debate on October 22, as per the commission’s rules.

But despite attempts from the president and his medical team to downplay the president’s condition, White House Chief of Staff Mark Meadows told Fox News while Trump was still hospitalized that “we were real concerned” because Trump “had a fever and his blood oxygen level dropped rapidly” on the day he was admitted to the hospital.

After leaving the hospital, Trump has stated he’s “immune” to the virus and that the medicines he received were a “cure”.

However, scientists aren’t sure how long immunity may last in a person who recovered from COVID-19, and the US already has its first reinfection case. Some of the medicines given to Trump, like Regeneron, also haven’t received emergency use authorizations and are not being widely used as therapeutics for COVID-19.

Neither the White House physician nor the president have said exactly what symptoms were considered mild, however when asked by Guthrie if he had pneumonia, the president said no, but his lungs were “a bit different, a little bit perhaps infected”.

Trump’s general approval rating, as well as the approval of his handling of the coronavirus pandemic, has stayed stagnant during months of NBC News|SurveyMonkey polling.

By comparison, 58 percent of adults say they approve of their governor’s handling of the pandemic, with 40 percent disapproving.