Report: US Colleges Welcomed Students Back Likely Led to A Surge in COVID Cases 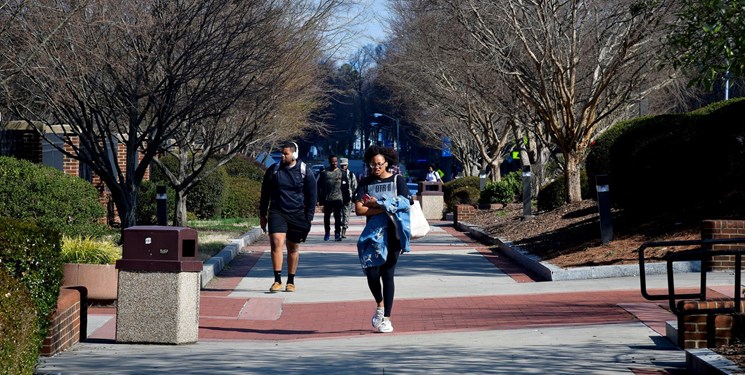 TEHRAN (FNA)- From late July through September, students from more than 2,400 colleges and universities went back to campus to participate in what has ultimately become an American experiment in how institutions of higher education can operate during a pandemic.

It has been a few weeks since the most dramatic effects of college reopening have been seen, and in the time since, research has started to show that inviting students back to college likely led to a rise in COVID-19 cases in the US, The Guardian reported.

The Centers for Disease Control (CDC) has announced that young adults ages 18 to 22 saw a 55% increase nationally in COVID-19 cases in August.

The picture that emerges in US education is a patchwork one, both of how universities are dealing with the crisis and how their students are reacting to it.

Data from the College Crisis Initiative, a research project out of Davidson College, and the Chronicle of Higher Education indicate that just over 300 campuses are closed for the fall semester. Most schools are doing some type of hybrid learning, holding some or most classes online and offering select classes in-person, meaning they welcomed at least some of their students back to campus at the end of the summer.

Another study, released in September and currently up for peer-review, was conducted by a group of epidemiologists, economics and higher education experts who used GPS tracking data from cell phones to look at movements of people at the end of the summer.

The GPS data was paired with reopening plans of schools and the COVID-19 infection rate in surrounding counties. The researchers found that campus reopenings led to an estimated 3,200 additional COVID-19 cases per day, primarily from students who traveled away from their home towns to go back to school.

Ana Bento, an infectious disease expert with Indiana University’s School of Public Health and co-author of the study, stated that the influx of cases was largely driven by the “increase in flow of individuals from other parts of the country to campus”.

Schools that invited students back for in-person classes saw a larger flow of students than schools that kept everything online, Bento said, even if students were coming back to campus to live off-campus or be with friends for the latter scenario.

Bento added that the rise in cases from college reopenings was mostly seen at the beginning of the school year when students were just coming on to campus. Now, schools have hit a plateau in the total number of cases after administrators implemented policies that likely averted more cases.

Researchers with the College Crisis Initiative, which has been tracking COVID-19 on college campuses since the end of summer, have noticed three common factors among schools that have had relative success at keeping the virus at bay: control of foot traffic to and from campus, a comprehensive testing regime, and a strong sense of community that encourages students to follow guidelines.

Danya Rangachar, a student at Davidson who is one of the researchers with the College Crisis Initiative, noted that, by nature, small liberal arts colleges seem to have an easier time managing the virus because they can hit those markers more easily.

For example, Davidson, which is located in Davidson, North Carolina, and has a student population of just under 2,000, has had no major outbreaks of the virus on campus. Rangachar, a senior at the college, said that likely attests to the school being a small community.

“Every student gets tested once a week. Staff and faculty get tested as well. Because we’re a smaller school, students are more likely to adhere to community guidelines,” Rangachar added.

But testing alone cannot ensure a school can prevent outbreaks on campus, but it has been essential in helping schools monitor the spread of the virus.

The University of Notre Dame in South Bend, Indiana, which has a student population of about 8,000, saw 147 positive COVID-19 cases just as classes were starting in August. The school shifted to online-only classes for two weeks, asking students to shelter-in-place, and has since reopened with mandatory “surveillance” testing of students living on campus, meaning the school tests students at random to gauge asymptomatic spread of the virus on campus.

Though the school has seen a small handful of positive tests on some days, students on campus are comforted that the school’s daily dashboard of cases can keep them abreast of the virus’ spread on campus.

Kathleen Meyer, a junior at Notre Dame, said that she checks the dashboard every day and has been relieved daily numbers on campus have been relatively low since the semester started.

“People are still taking it super seriously. No one wants to get sick and have to go into quarantine,” Meyer added.

A recent analysis from NPR, using data from the College Crisis Initiative on 1,400 schools that have reopened their campuses, showed schools like Davidson and Notre Dame that have mandatory testing are actually in the minority. A quarter of schools are doing “surveillance” testing like Notre Dame while only 6% are doing mandatory testing of all students, like Davidson. Most schools are only testing students who are showing symptoms, which does not allow a school to track asymptomatic cases of the virus.

It has been particularly hard for schools to monitor students who are living off-campus. The University of South Carolina, which has a student population of about 34,000 and has had almost 2,500 cases since August, has resorted to giving free swag to students who are chosen at random for testing but have the option to opt-out.

Gabriella Daniels, a senior at the University of South Carolina, said that some students opt to get tested at clinics outside of the university so a positive case does not go toward the university’s total case count.

“I know plenty of people who have had coronavirus and they were just quarantined in their apartment,” Daniels continued, adding that coronavirus was particularly rampant at the beginning of the semester, “pretty much everyone I knew at one point or another had coronavirus or had to quarantine”.

Students on campus are still adhering to mask and social distancing guidelines, but off campus, “it seems like the university really has no control”.

“It’s become a normal thing … I’ve heard plenty of people be like, ‘I already had it so it’s not like I can get it again. I have antibodies for a while.’ That’s just been everyone’s attitude,” Daniel said, adding, “Everyone’s like, ‘I see my friends getting it, and they’re perfectly fine and able to get out to bars, so what’s the difference if I get it?’”

The casual attitude around COVID-19 is not shared by all college students. Trinity Cross said that she feels she takes the virus more seriously than her peers, turning down invitations to parties that she feels are too dangerous and ensures that she is around a group of friends who are regularly tested. After her cousin died of COVID-19 over the summer, the risk of contracting the virus looms large.

“I can lose a friend at any moment … I have chronic asthma, and I have seen death [from the virus] very closely,” Cross stated, adding, “I avoid certain outings with friends. I can’t risk it – it’s life or death really.”

Her school, the University of Wisconsin – Madison, halted in-person classes for two weeks after cases spiked to over a thousand on the campus of more than 40,000. Cross noted she is disappointed with the number of students she sees still walking around campus without a mask – even though the school requires masks in school buildings.

On days when she’s walking around outside on campus, she counts the number of people without masks. On a recent Wednesday, she counted 20 people.

“I thought they were going to send us all back home [at the beginning of the school year], and I was just preparing for that because I knew that people weren’t taking this as seriously as they should,” Cross said, adding, “Right now we’re kind of just waiting for the next big thing to happen.”