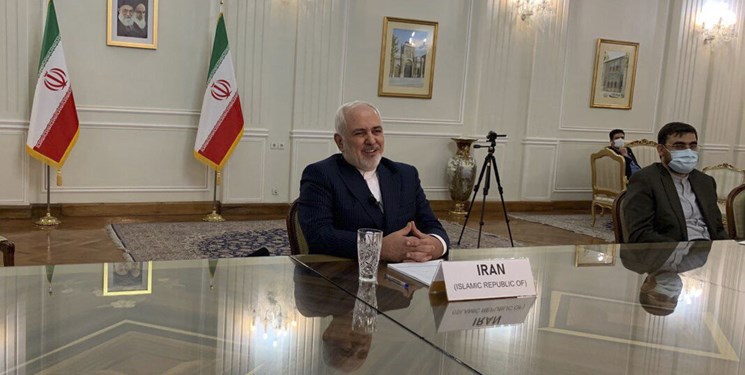 TEHRAN (FNA)- Iranian Foreign Minister Mohammad Javad Zarif said that his country is not going to rush into an arms race despite the removal of UNSC sanctions, stressing that the security of the region can be achieved only through the cooperation of the regional states rather than begging from trans-regional powers, led by the US, who is the biggest arms seller to the region.

Here is the full text of his remarks:

"In the Name of God, the Compassionate, the Merciful

Allow me to begin by thanking you for convening this important meeting, and thank Russia for its constructive initiatives. I would also like to acknowledge and welcome the initiative by my friend, State Councilor Wang Yi.

A year ago, I participated in a similar meeting of the Security Council, presided by you, Minister Lavrov, to present the Hormuz Peace Endeavor—or HOPE—that had just been launched by President Rouhani in his address to the General Assembly.

Iran stands by that initiative which is the culmination of various Iranian proposals for security and confidence building in the Persian Gulf region. Our first proposal in 1985 became the foundation of paragraphs 5 and 8 of Security Council Resolution 598, which read:

5. Calls upon all other States to exercise the utmost restraint and to refrain from any act which may lead to further escalation and widening of the conflict and thus to facilitate the implementation of the present resolution;

8. Further requests the Secretary-General to examine in consultation with Iran and Iraq and with other states of the region measures to enhance the security and stability of the region;

And our region has since been the scene of several wars, massive foreign military buildups, ensuing nightmare of extremism and terrorism, dangerous accumulation of the most sophisticated weaponry, and aggression and power projection by various actors.

The disparities in power, geographic size, and natural and human resources are very real. Historical anxieties and rivalries among many regional countries cannot be overlooked. But three flawed prescriptions have caused catastrophic consequences:

First, that you can purchase security from others: Be it from Saddam Hussein invading Iran on some of our neighbor’s behalf; or from the US coming to rescue our neighbors from the monster that they had together created; or through unprecedented purchase of military hardware.

Second, that you can have security at the expense of the insecurity of your neighbors: Be it Iran, Kuwait or Qatar at one time or another.

And third, that you can establish regional hegemony: Be it in Yemen, North Africa or the Horn of Africa.

Extra-regional actors have looked at our regional disparities, unending rivalries, and new hegemonic illusions as opportunities to expand their military presence and to sell more weapons.

The US has deployed nearly 50,000 troops in the Persian Gulf region in 29 military installations with more than 300 combat aircraft.

It has at least one aircraft carrier patrolling our waters at any given time, as well as tens of destroyers and other vessels with four Central Command Headquarters for its Army and its Special Forces, Air Force, and Navy.

And, from 2014 to 2018, the Persian Gulf States accounted for nearly one quarter of global arms imports, almost double compared to the preceding five years. Unsurprisingly, the United States sold most of these lethal armaments.

Yet, the military build-ups and hundreds of billions of dollars of arms sales have enhanced neither the security of the external powers, nor of the region.

Let me take this opportunity here and express our appreciation to the overwhelming majority of Security Council members for rejecting US efforts to kill the JCPOA and Security Council Resolution 2231.  Iran does not intend to engage in an arms race in the region and start a buying spree in spite of the end of Security Council restrictions.

For too long, foreign forces have come to our region to project their power, not to protect our people.

The illegitimate US presence—7600 miles from its shores— culminated in the cowardly assassination by President Trump of General Qassem Soleimani, Daesh’s Enemy No.1.

Security is contingent on a reliance on our own peoples and cooperation with our own neighbors.

Yes, with money one can buy the most sophisticated weaponry.

But the truth is: security and stability can never be bought.

We need collective efforts by regional countries to establish inclusive dialogue and security networking in this region. Otherwise, we will all be engulfed in turmoil for generations to come.

And our turmoil will be everyone’s turmoil.

We need a fundamental paradigm shift in our region.

We need a strong region that precludes hegemonic illusions by any power—regional or global.

A strong region that requires homegrown political and territorial stability.

And a strong region in which all neighbors exercise strategic self-restraint.

Our Hormuz Peace Endeavor (or HOPE) is founded on these imperatives.

HOPE also rests on the responsibility of every state in the region to ensure peace, stability and prosperity in our neighborhood, and to benefit from it.

HOPE is founded on a commitment by all littoral states to:

* Promote mutual understanding, peaceful and friendly relations and cooperation among all States and peoples of the Persian Gulf region;

* Ensure the territorial integrity and inviolability of international boundaries of all Persian Gulf littoral states;

* Cooperate in eradicating terrorism, extremism and sectarian tensions across the region;

* Promote peaceful resolution of all regional tensions and conflicts through enhanced communication and early warning; and

* Ensure the freedom of navigation and energy security for all.

To achieve these objectives, we propose adherence to common principles such as

; * respect for each other’s sovereignty

rejection of the threat or use of force;*

* non-aggression and non-intervention in the internal affairs of each other; and

* rejection of participation in alliances and coalitions against one another.

We believe that a new regional approach should be the outcome of collective deliberations. Last year, President Rouhani shared our initial thoughts with all the leaders of the littoral states of the Persian Gulf, inviting them to enrich these ideas and participate in their implementation.

We can agree on regional early warning systems and on military contacts among Persian Gulf littoral states.

We can agree to establish joint task forces regarding practical measures to gradually expand cooperation.

We know that most of our neighbors prefer peace and dialogue. That cannot be achieved if one or two pursue confrontation and wishfully wait for alien vampires to “cut their neighbor’s head”. That delusion will never be realized.

We all have anxieties and grievances.

Certainly, Iranians will never forget 8 years of an imposed war: the aggressor fully financed by our neighbors.

So, we can choose to remain prisoners of the past and perpetuate instability and tension.

Or, all of us—and I stress all—can choose peace, security, stability and prosperity for all.

The choice, surely, should be obvious to everyone.