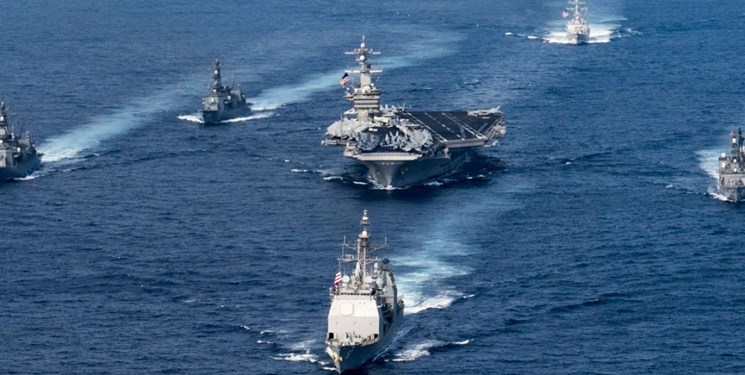 TEHRAN (FNA)- China says the United States is flexing its military muscles in the South China Sea by conducting joint exercises with two aircraft carrier groups in the strategic waterway.

According to Chinese Foreign Ministry Spokesperson Zhao Lijian, the exercises are performed “totally out of ulterior motives” and undermine stability in the area. “Against such a backdrop, the US deliberately dispatched massive forces to conduct large-scale military exercises in the relevant waters of the South China Sea to flex its military muscle.”

No doubt, Washington sees the ongoing drills as a potential counterweight to growing Chinese influence in Asia-Pacific. However, the collation has been denounced by Beijing as an anti-China bloc. But there is more this new mishap than meets the eye.

The US budget deficit hit an all-time high of 3.1 trillion dollars in the 2020 budget year, and the Trump administration and the Republicans are to blame. Trump wants to compromise on a new relief package, but Senate Republicans don't, so long as the spending levels are proposed by Democrats.

This has led to a growing debate over the Pentagon's 2021 budget, which is also blamed for the deficit because of its endless wars in the Middle East and North Africa. For the same reason, progressives on the Capitol Hill are pressing for lowered war budgets for the Pentagon. They say the greatest threat to the US national security is its growing debt and not China, and that military overreach is the death knell of the American empire.

This has alarmed the Pentagon regime and its top strategists and warmongers. While the facts are not on his side, Secretary of Defense Mark Esper still claims an increase in US military spending can help counter China and Russia. His claim is that a bigger budget is needed to turn the region into Washington's periphery for long-term great-power competition and "to stay ahead of the challenges we face, especially from China."

On the other hand, Trump’s beleaguered campaign team has woken up to another setback as a new national poll shows their candidate behind his challenger Joe Biden with less than two weeks until the election day.

Frustrated by widespread criticism over his poor response to the coronavirus outbreak and the nationwide racial unrests, they say he is behind. Other people close to him, including some of his staunchest allies, also believe that he is on course to be a one-term president. Trump recently told his supporters at a campaign rally in Macon, Georgia, that after an election loss to Biden, "maybe I have to leave the country, I don't know."

Under the current circumstances, Trump's advisers insist he still has time to rebound and improve the political environment. Behind the scenes, they are taking steps to change tactics. This may include exploiting foreign and military policy for their domestic political gains. To this end, one place to go has to be the South China Sea where the US naval forces are doing everything they can to needle Beijing.

However, there is no doubt that the Trump administration failed to deal with the impact of the coronavirus pandemic for different reasons. They failed to save as many lives as others. They now have to deal with a broken social safety net and a war of disinformation pertaining to poverty, economic inequality, police violence, protests for racial justice, and white supremacy.

The progressives and the anti-Trump mainstream media outlets blame this nightmare on his handling of the virus as well as foreign policy mistakes related to Iran, Russia and China. They say he regularly denied there's a need for masks, social distancing, and shutdowns. He didn't listen to his own medical experts and senior figures overseeing the pandemic response. Instead, he went for finding scapegoats in the name of China and others, while allowing the disease to spread throughout the country via open borders.

Taken together, the Trump administration has failed to deal with all these major crises in good time, all due to their own mistakes and silly ambitions overseas. Their new  strategic mistake to hold naval drills in the South China Sea won’t change the course of actions on the ground, either. Put simply, China need not interrupt the US and its duped allies when they are clearly making a big mistake in the strategic region. It won’t help Trump win re-election.