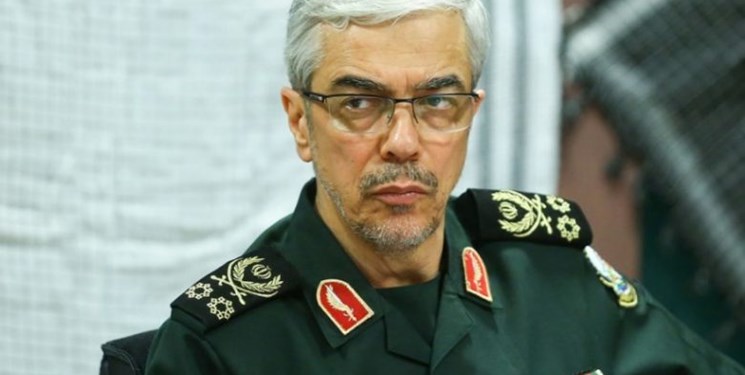 TEHRAN (FNA)- Chief of Staff of the Iranian Armed Forces Major General Mohammad Hossein Baqeri dismissed any possibility for talks with the US.

“The terrorist and criminal US withdrew from its undertakings while Iran was committed to all its undertakings under the nuclear deal and it reimposed sanctions against Iran again,” General Baqeri said on Monday.

“The enemy aims to force the Iranian nation to accept the US imposed strategies and policies. They want to force Iran to sit to the negotiating table and the result of this imposed negotiation has been predetermined and it is surrendering to the US and it does not comply with the goals of the holy Islamic Republic,” he added.

General Baqeri underlined Iran’s strategy of active resistance and progress and self-reliance despite threats and pressures, and said the Iranian Armed Forces are in their best situation considering preparedness and solidarity.

General Baqeri had earlier this month said that his nation remains undeterred by the United States' hollow threats.

“The anger of the Great Satan (US), its bombastic but hollow military efforts and moves, and some Arab countries’ treacherous normalization of ties with the Zionist regime will not create any doubt in the superiority of the Right Front,” Major General Baqeri said in a joint graduation ceremony of the Army, Islamic Revolution Guards Corps (IRGC), and Police cadets through video conferencing.

He hailed the achievements and the capabilities of the Armed Forces and officers’ academies over the past years, adding that the recent failures of the US at the international arena are only part of the defeats of the enemy.

“Defensive power is one of the pillars of national authority; if we consider at least three main pillars for this authority, these three pillars are economic strength and stability, cultural power and defense might,” he added.

“Defensive power is vital to the power of a nation. If nations do not have this defensive might, those who are used to attacking on and interfering in other countries, including the United States and some other countries, will not leave them alone and will attack everything as (we are witnessing) what is happening today in some countries,” the Leader said.

He noted that the reason for the “prating” of American officials about Iran's defense, missile and regional capabilities is the accurate and rational assessment of the Islamic Republic to achieve these capabilities, and said, "This propaganda and commotion stem from their backwardness in rational thinking. But regardless of this propaganda, the rational assessment system must be maintained, and thanks God, the Islamic Republic will continue to advance in all these areas.”

The Iranian leader noted the US sanctions on the nation, and said, "The US President happily says that by imposing maximum pressure and sanctions, they have disrupted Iran’s economy. Only reprobates like him take pride in committing crimes against a nation."

"We have economic problems that are all resolvable. The remedy to these problems is relying on domestic production and removing loopholes such as smuggling, reckless imports and financial corruption. These loopholes prevent the efforts made from achieving the desired results," he added.