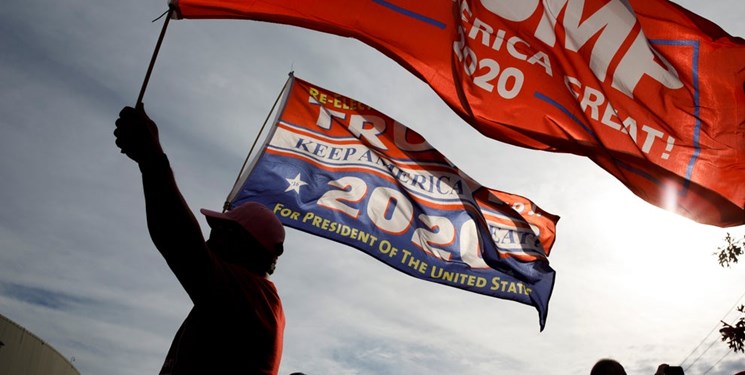 TEHRAN (FNA)- A supporter of President Donald Trump was caught on video pointing a gun at a group of young protesters during an unofficial Trump rally in Woodinville, Washington, over the weekend.

Police have launched an investigation into the incident, which began when a man in a Trump cap pulled out a gun and pointed it at rival demonstrators, who were supporting Joe Biden, The Independent reported.

Witnesses told media outlets that a bucket of liquid had been poured on the man. In the video footage, he can be seeing wiping his face, while one of the pro-Biden supporters yells, "It's water, you snowflake."

Shouts and expletives can be heard in the footage as the groups confront one another, with one of the pro-Biden supporters yelling, "What's your name? I'm calling the police."

The man with the gun can soon be seen walking away from the group as someone else held him by the arm. According to TMZ, the man remained on the scene and cooperated with authorities. He reportedly complained his eyes were burning and was checked by firefighters.

Sergeant Ryan Abbott told The Seattle Times that about 15 people were involved in the incident. He noted officers have spoken with witnesses from both sides and are trying to determine what sort of liquid was thrown.

Abbott told the newspaper, "There's a lot of different stories [and] we're trying to figure out what happened."

While the Trump supporter was not arrested or cited for pointing a gun at a group of people, police are said to be searching for the person who poured liquid on him.