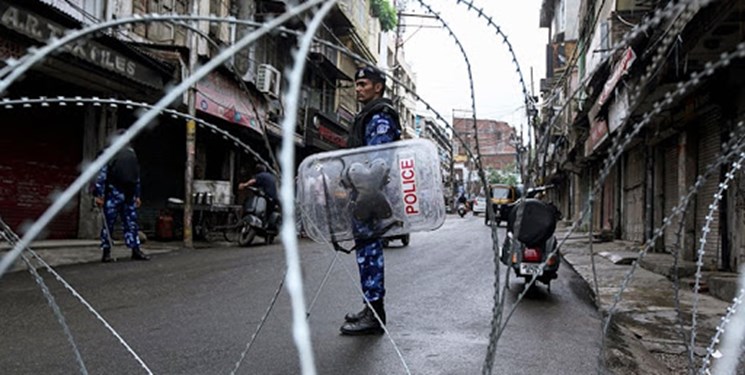 TEHRAN (FNA)- India has enacted a series of new laws – and amended some – allowing any of its nationals to buy land in the disputed Indian-administered Kashmir, a move that has been condemned by the residents.

Kashmiris fear the new laws, notified on Tuesday, are aimed at a “land grab” to dilute the Muslim-majority character of the region, whose partial autonomy was scrapped in August 2019, bringing it under New Delhi’s direct control, Al-Jazeera reported.

The land laws – the latest in a series of changes authorised by the Hindu right-wing Bharatiya Janata Party (BJP) – were implemented on the day Kashmir observed “Black Day” to mark the arrival of the Indian army in the region’s main city of Srinagar in 1947.

Tuesday’s notification issued by the federal home ministry removes the reference to “permanent residents of the state”, thus allowing any Indian citizen to buy land in the disputed region.

The new laws also allow the lands acquired by the government for industrial or commercial purposes to be disposed of or sold to any Indian.

They also authorise the Indian army to declare any area as “strategic” for operational and training purposes against the Kashmiri rebels.

Kashmir, which is divided between India and Pakistan and claimed in full by both, enjoyed autonomy under Article 370 of the Indian constitution, which secured land rights to residents and banned its sale to outsiders.

The law had survived multiple governments in New Delhi before the BJP-led government abrogated it in 2019 and divided the region into two federal territories: Jammu and Kashmir, and Ladakh.

Defending the new laws, Lt Governor Manoj Sinha, the administrative chief of the region, on Tuesday said it was a decision taken to encourage industries and that agricultural land will not be affected.

“I want to say this forcefully and with full responsibility that agricultural land has been kept reserved for farmers. No outsider will come on those lands,” he said.

“The industrial areas that we have defined, we want that like rest of the country, here too, industries come so that Jammu and Kashmir also develops and employment is generated,” he added.

Muslims in Kashmir fear the new land laws are aimed at changing the demography of the region.

According to a 2011 census conducted by India, Muslims comprise 68.31 percent of the region’s 12.5 million people, while Hindus are 28.43 percent. Muslims dominate the Kashmir valley with more than 96 percent of the population.

Jozia Akbar, a 28-year-old university student in Kashmir, told Al-Jazeera the new laws have “strengthened our fears that everything we own can be taken anytime”.

“Everything is being done like it happened in Palestine,” she said, adding, “People lost and are still losing their homes and their land. These laws are announcing it openly what our fathers and grandfathers have protected for ages and given sacrifices for.”

The fear that Kashmir could turn into another Palestine has intensified in the region, with even its former Chief Minister Mehbooba Mufti making such references.

Muslim politicians from the region, including Mufti, have expressed shock and resentment at the new laws, accusing India of putting Kashmir’s land “up for sale”.

Omar Abdullah, another former chief minister and once a prominent pro-India leader, said India’s decision was “unacceptable” and would hit small landowners.

“Even the tokenism of domicile has been done away with when purchasing non-agricultural land and transfer of agricultural land has been made easier. [Jammu and Kashmir] is now up for sale and the poorer small land holding owners will suffer,” Abdullah tweeted.

Mufti and Abdullah are now part of People’s Alliance for Gupkar Declaration, a conglomerate of pro-India Kashmiri leaders demanding restoration of the region’s autonomy and statehood.

In a statement, the alliance said the land laws were a “huge betrayal” and a “massive assault” on the rights of the Kashmiris.

Kashmiri experts and activists fear the new steps will lead to the “dislocation and deprivation of the local population”.

“After Article 370 was abrogated last year, it is the same step now being taken forward. The new laws increase a sense of insecurity and has a potential of making locals strangers within their own lands,” Sheikh Showkat Hussain, a law professor and political analyst, told Al- Jazeera.

Kashmir-based rights activist Khurram Parvez said the “real reason” behind the abrogation of Article 370 was “land grab and demographic changes”.

“BJP had then claimed it was being done to ensure development, creation of jobs, women empowerment and transparency. Kashmiris knew the real reason was land,” he told Al-Jazeera.

“It cannot be any more brazen and violent as all these laws are being introduced amid a pandemic,” he said.