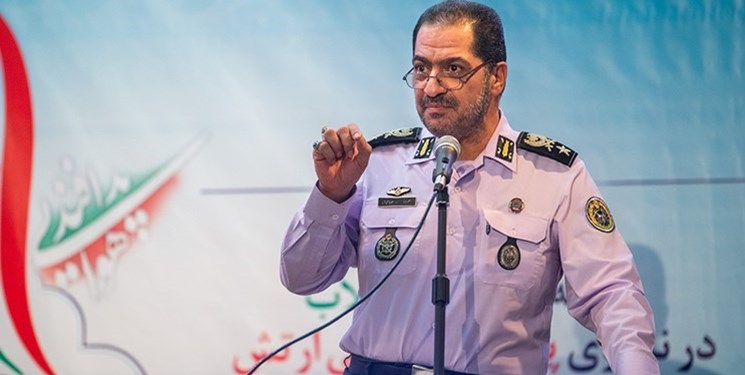 TEHRAN (FNA)- Commander of the Army's Khatam ol-Anbiya Air Defense Base Brigadier General Alireza Sabahi Fard underlined deployment of powerful air defense systems at the Northwestern borders of Iran amid the Karabakh war, stressing that no country is allowed to violate the Iranian sky.

Iran allows no country to make any aggression against the Iranian sky, General Sabahi Fard said on Wednesday.

"Air defense bases stationed at the Northwestern borders of our country, the same as 3,700 others across Iran, are monitoring all the movements 24 hours every day," he added.

"Since the beginning of the Nagorno-Karabakh conflict, we have deployed the best air defense systems at the borders of the Northwestern provinces and we are carefully monitoring the sky of this region," General Sabahi Fard noted.

In relevant remarks on Tuesday, Iranian Army Commander Major General Seyed Abdolrahim Mousavi announced that the country has strengthened its air defense shield at the Northwestern borders amid the continued war between Azerbaijan and Armenia.

“The air defense units in Northwestern Iran have been reinvigorated and more equipment will join them if necessary. Tranquility of people is of special importance to us,” General Mousavi said.

“Respect for the countries’ territorial integrity and protecting the internationally-recognized borders is among our known principles and we will not tolerate any change in them and we are opposed to any change,” he added.

General Mousavi also warned that the Iranian Armed Forces will show a strong and crushing response to any Takfiri and ISIL terrorists and Zionist that appears at the country's bordering areas.

Commander of the Border Guards of the Islamic Republic of Iran Police Brigadier-General Ahmad Ali Goudarzi announced on Saturday tightened security measures at the Northwestern bordering areas of the country after several misfire incidents during the Karabakh war between Azerbaijan and Armenia.

He said that at present sustainable security prevails at all bordering areas of Iran, describing the situation as “desirable and proper”.

General Goudarzi referred to several mortar rounds which have hit the Iranian bordering areas during the Karabakh war in the past few weeks, and said both Azerbaijan and Armenia were cautioned against repetition of such incidents and their border guards authorities were summoned and received notifications.

Last week, Spokesman for the Iranian Armed Forces Brigadier General Abolfazl Shekarchi warned Armenia and the Azerbaijan Republic to avoid crossing Iran’s red lines, stressing that their dispute can be resolved through dialogue.

“The Islamic Republic of Iran, while reinforcing the defensive measures at border areas, stresses that the security of border areas and Iranian people is the country’s red line,” Shekarchi said on Friday, adding that a number of shells have hit the Iranian territory following the military conflict between the Caucasian states.

Last week, a rocket fired during clashes between the warring sides, Armenia and Azerbaijan, landed in a village house in the Northeastern bordering province of East Azarbaijan in Iran.

“A rocket fired during the Karabakh conflict between the Republic of Azerbaijan and Armenia hit a house in the village of Ozan of Manjavan district of the town of Khoda Afarin about 12:00 today,” Governor of Khoda Afarin Ali Amiri Raad said.

He added that the rocket damaged the house but did not leave any casualties, noting that the military and security forces are present on the scene to investigate the incident.

In another incident last week, a drone most likely belonging to the warring sides of Azerbaijan and Armenia crashed near a village in East Azarbaijan province in Northwestern Iran.

“The drone crashed this morning in national and grassland areas near the village of Qara Qouch in Manjavan district,” Amiri Raad.