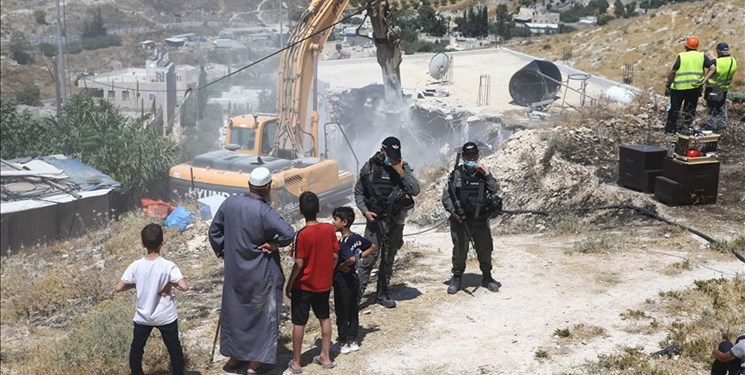 TEHRAN (FNA)- Israeli authorities have demolished a record number of Palestinian homes and structures in the occupied East Jerusalem al-Quds so far this year, despite the coronavirus pandemic that has seriously affected Palestinians’ lives.

“Along with the 125 housing units, 64 other units (shops, storerooms etc.) have also been demolished,” the Israeli organization noted.

According to its report, the number of razing permits has been too high in the mainly Palestinian Eastern half of the city despite a two-month suspension during the coronavirus lockdown this spring.

“This record number of home demolitions was reached despite the fact that Israeli authorities froze demolitions for three months earlier during 2020. The freeze only happened after persistent demands from human rights organizations pointing to the significant risk that displaced families face during the COVID-19 crisis,” Amim said.

“The freeze on demolitions took place during the two periods of lockdown in Israel: From March 24 to May 25 and from September 18 to October 18. Still, the record number of demolitions demonstrates that the Israeli authorities chose not to take the necessary steps in order to prevent families from losing their homes during the pandemic,” the Israeli NGO added.

“The main reason for the spike in demolitions is the full enactment of Amendment 116 to the Planning and Building Law which resulted in an unprecedented number of 84 housing units (and 30 other units), out of the 125, being self-demolished by the families who owned them,” it said.

The Israeli forces routinely demolish Palestinian houses in the occupied West Bank, claiming that the structures have been built without permits, which are nearly impossible to obtain. They also sometimes order Palestinian owners to demolish their own houses or pay the costs of the demolition if they do not.

“Israel's long term policy of refusing to initiate or approve new detailed outline plans for Palestinian neighborhoods in East Jerusalem lies at the root of unpermitted construction. Last year, for example, out of over 21,000 housing units advanced in detailed outline plans in Jerusalem less than 8 percent were for Palestinian neighborhoods of the city (Palestinians comprise 38 percent of Jerusalem's population),” Amim said.

Palestinians and Israeli anti-settlement groups have described the demolitions as a new attempt by the Tel Aviv regime to Judaize the Old City of Jerusalem al-Quds.

Last month, the United Nations (UN)’s Office for the Coordination of Humanitarian Affairs (OCHA) said there had been a sharp increase in the number of Palestinian houses being demolished by Israel in the occupied West Bank during the coronavirus pandemic. It said that Israel had demolished more than 500 structures in the occupied West Bank and the Gaza Strip this year.

Meanwhile, UN Humanitarian Coordinator for the Palestinian Territories Jamie McGoldrick warned that Israel’s demolition of Palestinian houses during the COVID-19 pandemic would make the Palestinians more susceptible to health risks.

More than 600,000 Israelis live in over 230 settlements built since the 1967 Israeli occupation of Palestinian territories of the West Bank and East Jerusalem al-Quds.

All Israeli settlements are illegal under international law. The UN Security Council has condemned Israel’s settlement activities in the occupied territories in several resolutions.

Palestinians want the West Bank as part of a future independent Palestinian state with East Jerusalem al-Quds as its capital.