France Brought This on Itself 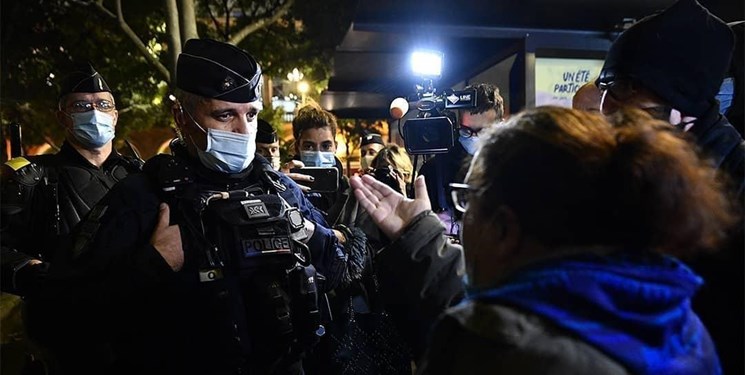 TEHRAN (FNA)- Tens of thousands of people from all walks of life in the Muslim world, Europe and elsewhere continue protests over the French president Emmanuel Macron’s silly vow to protect the right to publish blasphemous caricatures against the Prophet Mohammad (PBUH) and Islamic beliefs and values on the pretext of freedom of speech.

The tensions between France and Muslim nations flared up this month when some blasphemous images were republished by the satirical magazine Charlie Hebdo to mark the opening of the trial over the deadly 2015 attack against the publication. As expected, this angered Muslims across the world who consider depictions of the Prophet Mohammad (PBUH) blasphemous and outright wrong.

French Interior Minister Gerald Darmanin has warned there will be more attacks, as the country is placed on maximum security alert, following Thursday's deadly attack by a knife-wielding man, who killed three, at the Basilica of Notre-Dame in the southern city of Nice.

France's maximum-security alert level means repressive measures will be carried out such as arrests without warrants, police raids on premises and the blocking of websites with anti-establishment material. President Emmanuel Macron, who has called the deadly stabbing an "Islamist terrorist attack," announced that there will be increased surveillance of churches and military patrols on the streets. Troops guarding the streets have been bolstered in number, too.

One could say this is discriminatory and a violation of human rights. No doubt if it was another country putting troops on the streets and making warrantless arrests to stop anti-establishment protests, the West would rally against it. For France, however, these measures come too late for those who have already lost their lives due to terrorism and Macron’s anti-Islam rhetoric and policies.

France did the same thing when it helped the United States invade Iraq on the pretext of destroying Saddam’s non-existent weapons of mass destruction. As such, France knew the claims were geopolitically motivated, but it did send troops to Iraq to take part in one of the greatest human rights atrocities of this century. It sent troops to kill the Muslim population and get away with human rights violations and crimes against humanity in the name of bogus war on terror.

What is going on in France is in fact similar methods to what the French did employ in Iraq. Take for example French troops are placed on the streets of Paris and Nice after protests linked to the publication of cartoons and Macron’s hate speech on the pretext of freedom of speech.

The terrorist attacks that have taken place in France, while tragic, are a drop in the ocean compared to the thousands of state-sponsored terrorist attacks and bombings that took place in Iraq, Syria and Yemen on the pretext of democracy building and war on terrorism. The fact is a Muslim person's life is just as valuable as a French person's life and the Muslim governments have just as much responsibility to protect their citizens as the French government has to protect its citizens.

Thanks to the bogus war on terror by the US and its duped allies including France, their endless war has set up education centers for terrorism and Wahhabism not just in the Middle East but in Europe. This is no different to France which in 2016 opened its first de-radicalization center, in Pontourny, for its own jihadists returning from Syria.

Originally, the French government, who believed that over 9,000 people in France had been radicalized in Syria, planned to house many at these centers, known as "Centers for Prevention, Integration and Citizenship," to complete a ten-month curriculum.

However, in France, the centers, which were voluntary, have been a disaster because few attended. The fact is those who slice off innocent heads in churches and the US-led governments that who butcher citizens in Iraq, Syria and Yemen in the name of freedom and democracy believe their actions are justified. As such, they do not believe they are morally responsible under international law. This means they will not voluntarily attend a course to change their views, nor will they ever end their endless war on terror in the Middle East.

France has been involved in a number of illegal invasions and interventions that feed terrorism in both France and elsewhere in Europe. France also took part in the invasion of Afghanistan whose destabilization has played a prominent role in radicalizing many Afghans. France, along with the UK, led the charge in the destruction of Libya. It was French President Nicolas Sarkozy who made it his mission to gather an international coalition to wage war on Libya. France is also engulfed in the mess that is Syria. While being against President Assad, France has simultaneously bombed civilian areas in Syria.

France's foreign wars and interventions have destabilized the Middle East and Europe. This has led to refugees pouring into Europe which has in turn undermined the stability of European countries. The atrocities in Iraq, Afghanistan, Libya and Syria are human rights disasters that are unmatched and unprecedented. France brought universal damnation on itself.