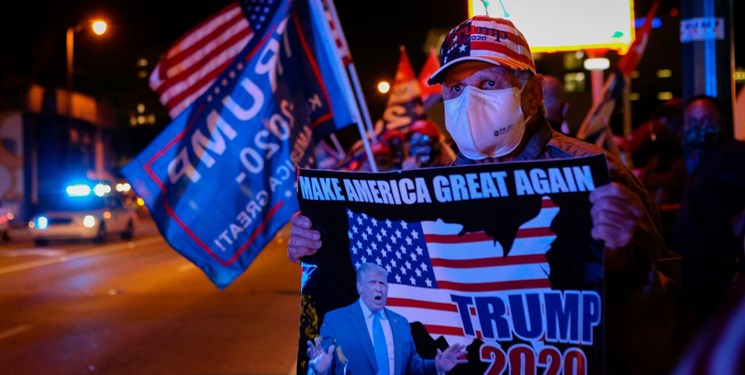 Dozens of angry supporters of President Donald Trump converged on vote-counting centres in Detroit and Phoenix as the returns went against him on Wednesday, Al-Jazeera reported.

In the state of Arizona, a crowd of Trump supporters gathered outside the Maricopa County Elections Department in Phoenix after unsubstantiated rumours that votes for the Republican president were deliberately not being counted.

“Stop the steal!” and “Count my vote” chanted the mostly unmasked protesters – some armed with rifles and handguns.

Some news outlets have called the critical battleground state for Biden, but Trump’s campaign says it is still in play. According to the Edison Research for the National Election Pool, with 86 percent of the estimated vote tallied so far, Biden leads with 50.5 percent compared with Trump’s 48.1 percent.

Trump himself dismissed the election as a “fraud” after The Associated Press news agency and Fox News called Arizona for Biden, and claimed he wanted to stop the counting of votes and leave the results to the Supreme Court.

According to the New York Times, Arizona’s Governor Doug Ducey, a Republican, had been on the phone all night with administration officials and campaign staff members, insisting there were still Republican votes to be counted in his state.

In Detroit, Trump supporters demonstrated outside the TCF Center shortly before The AP news agency declared Biden had won Michigan.

Video shot by local media showed angry people gathered outside the building and inside the lobby, with police officers lined up to keep them from entering the vote-counting area. They chanted, “Stop the count!” and “Stop the vote!”

Michigan Attorney General Dana Nessel, a Democrat, insisted both parties and the public had been given access to the tallying, “Using a robust system of checks and balances to ensure that all ballots are counted fairly and accurately.”