Iran Mocks at “Melting Down” of Terrorists’ Advocate 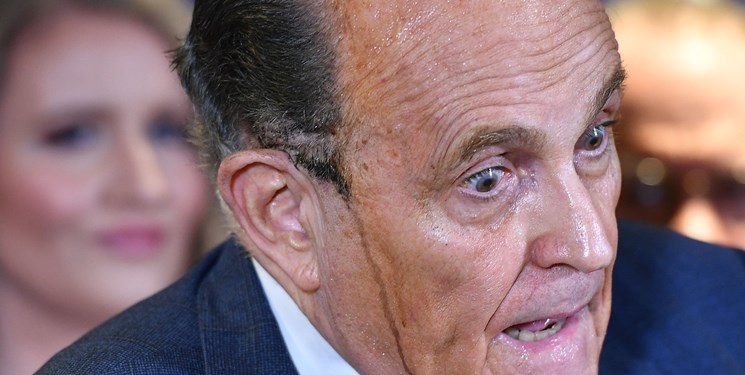 TEHRAN (FNA)- The Iranian Foreign Ministry ridiculed the supporter of MKO terrorists, Rudy Giuliani, likening his sweating at a press conference to his total melting down.

The foreign ministry, on its official Twitter page, described Giuliani as the advocate of the MKO terrorist group who has been trying for years to justify the crimes of the group against the Iranian nation through taking bribes from it, an added that the images of his sweating at a press conference can augur his total melting down and obliteration.

Not news to Iranians.

For years he's been a devil advocate, pocketing $$ by whitewashing despicable crimes of terrorists.

The MKO terror group has forged close ties with Giuliani, among other bosom friends of Trump. The former New York mayor has always participated as the guest speaker of the terrorist outfit’s events in Europe, where he took the podium to speak against Iran.

He is one of the persons who helped get the MKO off America’s terror list in exchange for a big sum of money.

Giuliani on Thursday held a farcical press conference, during which he raised claims while sweating, that Trump’s votes had been “stolen” in the recent presidential election.

Yet, what topped the news headlines were not his election-related claims. The viewers and media were instead drawn to his nervous performance with what looked his hair dye flowing down his face.

Rudy Giuliani stated on Saturday November 7 at a news conference in Philadelphia that President Donald Trump wouldn’t concede the election at this point and the race is “far from over”.

"Obviously he’s not going to concede when at least 600,000 ballots are in question," Giuliani claimed, shortly after the presidential race had been called in favor of President-elect Joe Biden, Fox News reported.