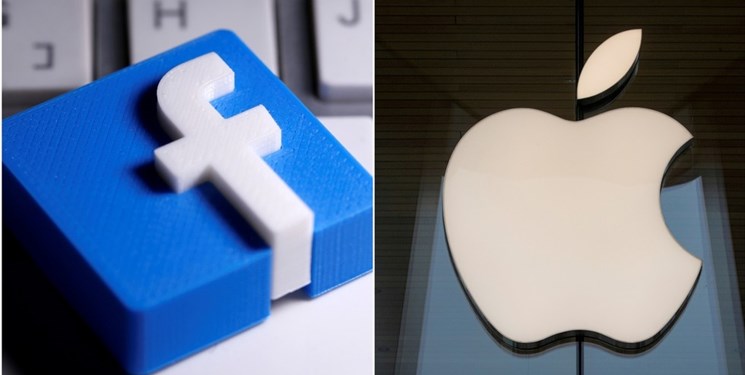 TEHRAN (FNA)- Apple slammed Facebook over indiscriminately syphoning users’ personal data as it pushed for its own latest privacy feature. The social media giant, in turn, announced Apple’s update is about market dominance, not privacy.

“Facebook executives have made clear their intent is to collect as much data as possible,” Apple’s director for global privacy, Jane Horvath, said in a letter to a coalition of eight civil and human rights organizations, RT reported.

She accused the social media giant of seeking to “monetize detailed profiles of their users”.

“This disregard for user privacy continues to expand to include more of their products,” Horvath warned as she confirmed the upcoming launch of Apple’s new privacy feature that would supposedly allow people to prevent app developers from tracking their activities.

Dubbed App Tracking Transparency framework or ATT, the new feature would require app developers to declare their intent to track a user’s activities in advance in the app description while giving the user an opportunity to opt out of it.

“We developed ATT for a single reason: because we share your concerns about users being tracked without their consent and the bundling and reselling of data by advertising networks and data brokers,” Horvath added in the letter.

The new feature was initially scheduled to be launched with the release of iOS 14 this fall but it was postponed by Apple to let advertisers prepare for the change. Now, it is expected to be released in early 2021.

Facebook was quick to shoot back by saying that Apple’s concern for users’ privacy is nothing but a disguise for unfair business practices.

“They claim it’s about privacy, but it’s about profit,” the social media giant announced, adding that Apple simply plans to use its “dominant market position” to prioritize its own data collection.

Currently, all iOS devices are outfitted with a special tracking code called Identifier for Advertisers (IDFA) that is created automatically and that allows Apple and third-party companies to track the activities of users. It is access to this code that the ATT is designed to regulate.

The very existence of the IDFA has meanwhile become a reason for a legal complaint – this time against Apple itself. A digital rights group NOYB (None of Your Business) filed the complaint with German and Spanish data protection regulators on behalf of some individual customers on Monday.

The group argued the IDFA is in breach of the EU's e-Privacy Directive. NOYB demands the code be not just restricted but deleted altogether.

The “tracking must be the exception, not the rule”, the group's lawyer, Stefano Rossetti, stated.