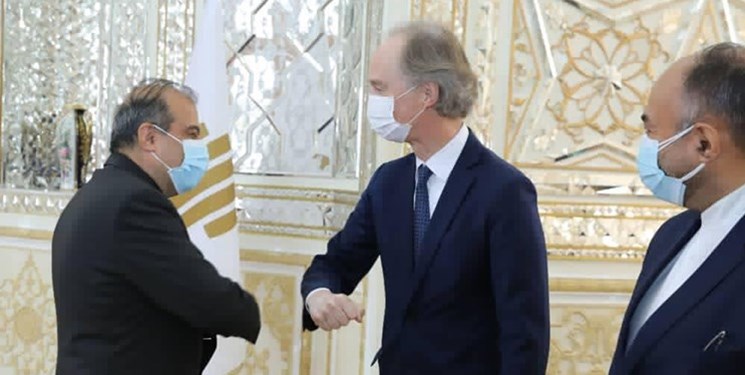 TEHRAN (FNA)- Senior Assistant to the Iranian Foreign Minister for Special Political Affairs Ali Asqar Khaji said that the western states are using the humanitarian issues in Syria to attain their political goals.

Khaji made the remarks in a meeting with UN Special Envoy for Syria Geir Otto Pedersen in Tehran on Saturday.

In relevant remarks earlier this month, Khaji in a phone conversation with Pedersen said various parties should converge to tackle the challenges facing Syria, insisting on the dire need for international participation to this end.

The Iranian diplomat underlined the need for collective efforts to help resolve Syria’s challenges as a humanitarian and positive move.

Pedersen, for his part, elaborated on the results of his negotiations with the representatives of several regional countries over the Syrian issue.

The two sides also exchanged views on the political process and activities of the Syrian Constitutional Committee.

They also addressed the issue of the Syrian refugees which will be discussed during a conference in Damascus in the coming weeks.

Back in late September, also, Khaji and Pedersen had underlined political means as the way to reach a final solution to the Syrian crisis.

Khaji and Pederson discussed the latest Syrian developments during a phone call on September 26.

Both diplomats voiced their support for the strengthening of the political trend and the continuation of cooperation with the Syrian Constitutional Committee.