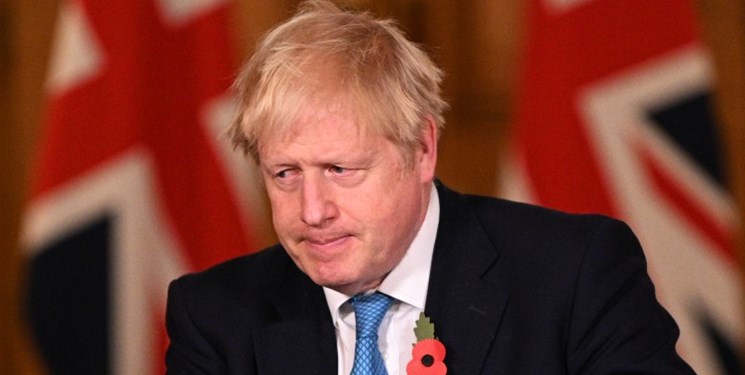 TEHRAN (FNA)- Prime Minister Boris Johnson is facing a major backbench rebellion over plans to reintroduce the tiered lockdown system, with 70 of his own MPs refusing to support them unless he proves they will work.

The prime minister will set out Monday a return to the three-level system but with more areas potentially placed into the top Tier 3 than before the November lockdown, ahead of a planned relaxation at Christmas, Daily Mail reported.

Johnson is also planning to relax the much-criticised 10 pm pub curfew, easing restrictions to allow drinking holes to call last orders at 10 pm and give punters an hour to drink up and finish meals.

But Johnson's plans, which have to be approved in a Commons vote to become law, are facing strident opposition from a hardcore block of his own party, who argue that the restrictions cause more damage than they prevent.

MPs in the COVID Recovery Group wrote to the prime minister demanding he give Parliament a full "cost-benefit analysis" of the new system amid concerns over the ongoing effect on the economy and also people with existing long-term health problems.

In the letter to the PM, the group led by former chief whip Mark Harper and High Wycombe MP Steve Baker, said, "There is no doubt that COVID is a deadly disease to many and it is vital that we control its spread effectively. But we must give equal regard to other lethal killers like cancer, dementia and heart disease, to people's mental health, and all the health implications of poverty and falling GDP."

"The tiered restrictions approach in principle attempts to link virus prevalence with measures to tackle it, but it's vital we remember always that even the tiered system of restrictions infringes deeply upon people's lives with huge health and economic costs..." they added.

"We cannot support this approach further unless the Government demonstrates the restrictions proposed for after December 3 will have an impact on slowing the transmission of COVID, and will save more lives than they cost," they continued.

If all 70 vote against the new tiers it would wipe out the Government's working majority if Labour also opposed them. However Sir Keir Starmer's party has so far backed COVID legislation.

It came as sources in No 10 stated that they believed that a wave of vaccines due to be rolled out within moths will allow the country to be "something close to normal" by Easter.

Chancellor Rishi Sunak has noted it was important to look at "the impact of coronavirus in the round" including the economy. He stopped short of agreeing to the CRG's demands, stating, "It's very hard to be precise in estimating the particular impact of a one-week restriction."

"What you will see next week when we have the spending review, alongside that will be a set of forecasts from the Office for Budget Responsibility ... which will show the enormous strain and stress our economy is experiencing, the job losses that you mention, the forecasts of what will happen, and it's right that we consider those in the round as we consider the best way to fight the virus," he continued.

Ministers will detail what tier each area will be placed into on Thursday.

Sunak added, "It's a tragedy that three-quarters of a million people have already lost their jobs. That's millions of families and people who are impacted by that, and it's a difficult time for everyone."

Johnson will on Monday tell the House of Commons and the nation in a televised address that lockdown will end, as promised, on December 2.

He will also set out details of a new winter plan to tackle COVID, including a revised three-tier structure for restrictions.

Sunak has warned that "Christmas is not going to be normal", saying the localised tiered system is a "far better way" to tackle COVID-19 as he confirmed the prime minister's plans, which were expected to be approved by the Cabinet on Sunday.

"I think, frustrating as it is for all of us, Christmas is not going to be normal this year," he told Ridge On Sunday, noting, "But that said, the prime minister and everyone else, we're looking at ways to see how families can spend some time with each other over (the) Christmas period."

"Obviously that's something that we would like to do and it's been a difficult year for all of us, but as I said it's not going to be a normal Christmas this year," he continued.

There is growing confidence that positive results from a trial of a vaccine being developed by Oxford University and the pharmaceutical firm AstraZeneca are "imminent".

Vaccines produced by Pfizer and the US firm Moderna have already been shown to be almost 95 percent effective.