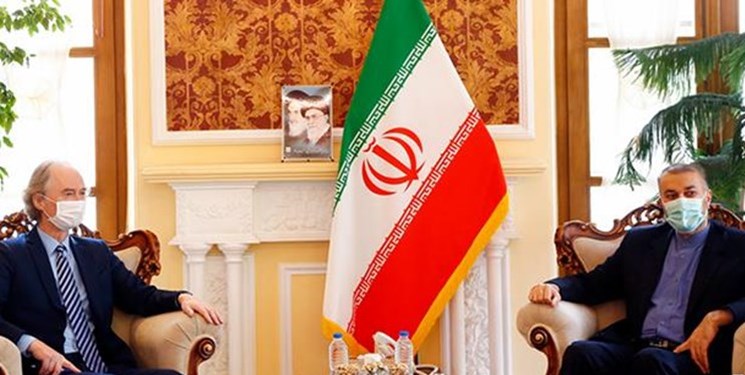 “Iran powerfully defends Syria in the region. The Islamic Republic of Iran welcomes the UN efforts and measures which help safeguarding Syria’s territorial integrity and national sovereignty and return of sustainable security to the country,” Amir Abdollahian said.

He also warned of certain dangerous terrorist groups’ attempts to take their name out of the UN terrorism list, calling for the UN’s impartiality in this regard.

“We believe that all sides are responsible in the process of the constitution committee’s activities and they should account for their acts, and reliance on attempts to blame the Syrian government contradicts the impartiality policy,” Amir Abdollahian said.

He also underscored the necessity for the removal of inhuman sanctions against Syria, specially in the medical and foodstuff fields.

Pedersen, for his part, lauded Iran’s constructive efforts to fight against terrorism in Syria, and said, “We are aware of the regional conditions and will continue our uninterrupted efforts to help Syria.”

In relevant remarks on Sunday, Iranian Foreign Minister Mohammad Javad Zarif had also said that the cruel sanctions against the Syrian government and people should be removed amid the coronavirus outbreak.

Zarif made the remarks in a meeting with Pedersen.

Pedersen, for his part, elaborated on the latest situation of the Syrian constitution committee and efforts to hold the next meeting, stressing Iran’s important role in settlement of the crisis in Syria.

Also, on Saturday, Senior Assistant to the Iranian Foreign Minister for Special Political Affairs Ali Asqar Khaji in a meeting with Pedersen said that the western states are using the humanitarian issues in Syria to attain their political goals.