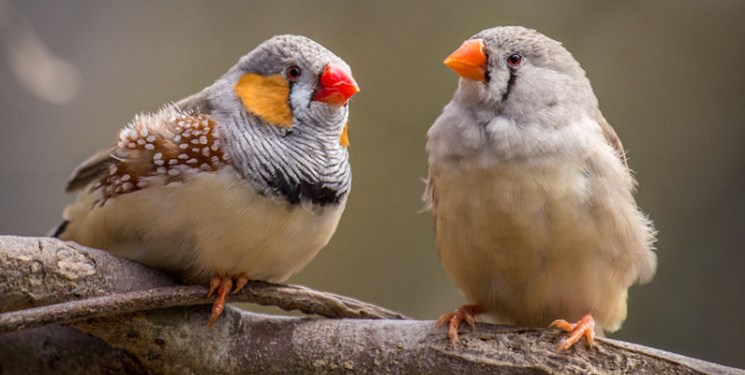 TEHRAN (FNA)- If songbirds could appear on "The Masked Singer" reality TV competition, zebra finches would likely steal the show. That's because they can rapidly memorize the signature sounds of at least 50 different members of their flock, according to new research from the University of California, Berkeley.

In findings recently published in the journal Science Advances, these boisterous, red-beaked songbirds, known as zebra finches, have been shown to pick one another out of a crowd (or flock) based on a particular peer's distinct song or contact call.

Like humans who can instantly tell which friend or relative is calling by the timbre of the person's voice, zebra finches have a near-human capacity for language mapping. Moreover, they can remember each other's unique vocalizations for months and perhaps longer, the findings suggest.

Theunissen and fellow researchers sought to gauge the scope and magnitude of zebra finches' ability to identify their feathered peers based purely on their unique sounds. As a result, they found that the birds, which mate for life, performed even better than anticipated.

"For animals, the ability to recognize the source and meaning of a cohort member's call requires complex mapping skills, and this is something zebra finches have clearly mastered," Theunissen said.

Zebra finches usually travel around in colonies of 50 to 100 birds, flying apart and then coming back together. Their songs are typically mating calls, while their distance or contact calls are used to identify where they are, or to locate one another.

"They have what we call a 'fusion fission' society, where they split up and then come back together," Theunissen said. "They don't want to separate from the flock, and so, if one of them gets lost, they might call out 'Hey, Ted, we're right here.' Or, if one of them is sitting in a nest while the other is foraging, one might call out to ask if it's safe to return to the nest."

These days, Theunissen keeps a few dozen zebra finches in aviaries on and around campus, 20 of which were used in this latest experiment.

In a two-part experiment, 20 captive zebra finches were trained to distinguish between different birds and their vocalizations. At first, half the birds were tested on memorizing songs, while the other half were assessed on distance or contact calls. They then switched those tasks.

Next, the zebra finches were placed, one at a time, inside a chamber and listened to sounds as part of a reward system. The goal was to train them to respond to particular zebra finches by hearing several different renditions of those birds' distinct vocalizations and memorizing them.

By pecking a key inside the chamber, the bird subjects triggered an audio recording of a zebra finch vocalization. If they waited until the six-second recording ended, and it was part of the reward group, they received birdseed. If they pecked before the recording was finished, they moved to the next recording. Over several trials, they learned which vocalizations would yield birdseed, and which ones to skip.

Next, the zebra finches were introduced to more audio recordings from new zebra finches, to teach them to distinguish which vocalizations belonged to which bird. They soon learned to differentiate between 16 different zebra finches.

"I am really impressed by the spectacular memory abilities that zebra finches possess in order to interpret communication calls," Theunissen said. "Previous research shows that songbirds are capable of using simple syntax to generate complex meanings and that, in many bird species, a song is learned by imitation. It is now clear that the songbird brain is wired for vocal communication."

In addition to Theunissen, co-authors of the study are Kevin Yu and Willam Wood at UC Berkeley.