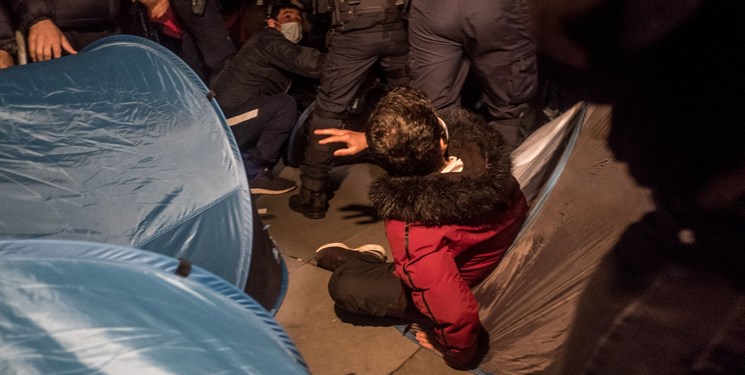 TEHRAN (FNA)- The French government is facing growing anger over the “shocking” use of excessive force by police dismantling a protest refugee camp in Central Paris.

Officers were filmed tipping migrants out of tents, slamming riot shields into individuals, chasing people down streets and attacking refugees, journalists and others with truncheons and teargas, The Guardian reported.

The criticism comes as the government is already under fire for a new law that would give police greater powers and is viewed as a threat to the freedom of the press.

The Paris mayor, Anne Hidalgo, also expressed outrage at what she called police violence and said the breaking up of the camp was a “denial of France’s humanitarian duty”.

“Present at the time, elected representatives of Paris city and of parliament reported, once again, the use of disproportionate and brutal force, confirmed by the many photographs that were taken. Unfortunately, this unacceptable episode is not without precedent,” Hidalgo wrote in a letter to the Interior Minister, Gérald Darmanin.

Darmanin, who described the photos and videos of the police operation as shocking, stated he had received a report from police chiefs and would ask the IGPN – the force’s internal disciplinary body – to look into “several unacceptable” incidents.

Darmanin added he expected the inquiry to report back within 48 hours and promised to make the conclusions public.

The Paris public prosecutor announced it had opened an official investigation for “violence by a person in public authority” following a complaint by journalist Rémy Buisine that he was assaulted several times by one officer as he covered the protest on Monday evening.

It followed the prosecutor opening a similar investigation after seeing a video of a police officer deliberately tripping up a migrant as he ran from the police.

Police and gendarmes were sent in late on Monday to clear a camp from the square in Central Paris. About 450 refugees had set up tents at the request of the charity Utopia 56 to protest against the forcible clearing of migrants from makeshift shelters in the Northern suburb of Saint-Denis. While some of those evacuated were provided with temporary accommodation, scores of migrants were left wandering the streets.

Before the protest camp was set up at Place de la République, Utopia 56 had issued a statement demanding the authorities provide shelter for the estimated 3,000 homeless migrants sleeping rough in and around the French capital.

As night fell, police and gendarmes arrived to clear the square. Officers were filmed pulling up tents and throwing people to the ground.

Police used teargas and crowd dispersal grenades to break up groups of people, and journalists announced they were deliberately targeted.

The police operation came at a delicate time for the French government, which is facing widespread criticism for a new law that would make it illegal to disseminate images of police officers in certain circumstances. Darmanin has vigorously defended Article 24 of the law, which would require media to obscure the faces of police officers, as “protecting those who protect us”.

The law, seen by many as a direct threat to press freedom, also authorises police use of drones and facial recognition technology. It has passed its first reading in the Assemblée Nationale.

The United Nations human rights council has raised concerns about the law, while France’s own independent defender of rights, Claire Hédon, has expressed her reservations, saying she is especially concerned about the “envisaged restrictions concerning the publishing of images of police agents while on duty” and guarantees that these would not threaten “either the freedom of the press or the right to information”.

A statement from the police prefecture announced the organisation of ad-hoc migrant camps in the city was “not acceptable” and that its officers had “therefore set about the immediate dispersion of this illegal occupation of a public space”.

Ian Brossat, a deputy Paris mayor in charge of housing, who was present, condemned the police operation and noted the only solution was for the state to find housing for the homeless.

“This problem is not one for the police to sort out. To think that we resolve social problems with truncheons is totally crazy,” Brossat continued, adding, “As long as there is no available housing, there will be people living outside, and as long as there are people living outside, there will be camps. To think we can solve that with the police harassment we have seen this evening is pathetic.”

Éric Coquerel, an MP for the leftwing La France Insoumise party, who was present at Place de la République on Monday, told FranceInfo, “What we saw was repression that is sadly not that unusual but was completely disproportionate. Was there a risk to the police officers? No. Was there a risk of damage to property? No. Instead there was a repression that fell, I remind you, on people who are only demanding that their human rights are respected, on peaceful activists, on journalists and elected representatives without discrimination.”

After the death of the French delivery driver Cédric Chouviat, who said “I’m suffocating” several times as police held him to the ground – an echo of George Floyd’s death in the US – Darmanin caused an outcry in July when he told the Assemblée Nationale, “When I hear the words ‘police violence’ personally, it’s me who suffocates.”

He added, “The police certainly exercise a violence, but it’s legitimate violence … after that, it has to be done in a proportional manner, within a framework. That a few people do so outside of the professional rules, punishment should be immediate. But it’s normal that the police and gendarmes are armed, intervene with force, so that the force remains with the republic and is not subject to the law of gangs or communities.”

Asked about police violence last year in the wake of the gilets jaunes protests, against which law and order forces used teargas, pepper spray, water cannon and rubber bullets, President Emmanuel Macron responded, “Don’t talk of ‘repression’ or ‘police violence’; these words are unacceptable in a legal state.”