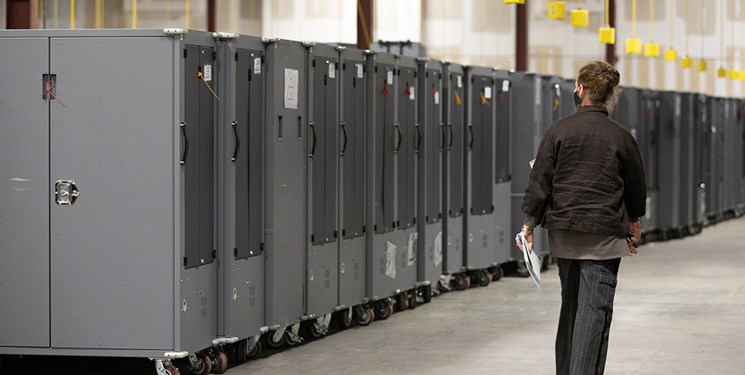 TEHRAN (FNA)- A judge assigned to a Republican-led lawsuit alleging widespread fraud in the presidential election in Georgia issued an order late Sunday night blocking plans to wipe or reset voting machines used in three counties in the state.

US District Judge Timothy Batten Sr. revealed in his four-page directive that he held a hearing via Zoom Sunday evening on the suit — one of two cases filed in federal courts last week by Sidney Powell, an outspoken Texas attorney who joined President Donald Trump’s legal team earlier this month only to be dismissed from it a few days later, POLITICO reported.

The hearing was not announced on the court’s docket and appears not to have been open to the press or public. It seems to have focused on claims that the election results in numerous states were wildly inaccurate due to use of machines from a leading vendor of voting equipment — Dominion Election Systems.

Powell has alleged, based on scant evidence, that the firm’s foreign ties allowed hostile governments to meddle in the US election via a conspiracy that involved both Democratic and Republican US officials.

While many Democratic and some Republican officials have dismissed Powell’s claims as a fantasy, some GOP leaders are also warning that the effort to stoke doubt about the just-completed election could depress Republican turnout in a pair of runoff elections set for January 5 in Georgia that could determine whether the GOP or Democrats control the US Senate for the next two years.

“Defendants are hereby enjoined and restrained from altering, destroying, or erasing, or allowing the alteration, destruction, or erasure of, any software or data on any Dominion voting machine in Cobb, Gwinnett, and Cherokee Counties,” wrote Batten, an appointee of President George W. Bush.

According to Batten, counsel for the defendants in the suit — Gov. Brian Kemp (R-Ga.), Secretary of State Brad Raffensperger and four other members of the Georgia Elections Board — argued that the court had no jurisdiction over the counties because they are not parties to the case.

The judge agreed to receive a brief by Wednesday afternoon from Kemp and Raffensperger detailing the reasons why they oppose allowing Powell’s team to conduct “forensic inspections” of the machines in the three counties.

In his order, Batten granted another request from the GOP plaintiffs, ordering the state to “promptly” provide the challengers with a copy of the state’s contract with Dominion.

A spokesperson for Georgia Attorney General Chris Carr, whose office has defended Kemp and Raffensperger in election litigation, did not respond to requests for comment late Sunday and Monday morning.

Batten’s nighttime order came after confusion earlier Sunday when one of Powell’s co-counsels, Georgia attorney Lin Wood, posted on the internet what he described as two other orders issued by the judge.

In those directives, Batten initially appeared to impose a statewide ban on clearing voting machines, then said he couldn’t do that because of the issue about the counties not being named as defendants in the suit.

Those orders also appeared to set an in-person hearing on the case for Friday in Atlanta. However, there’s no mention of such a hearing in Batten’s order issued Sunday night.

In addition, the orders Wood posted on the Web were never entered in the court’s public docket. A person familiar with the case told POLITICO Sunday that they were drafts, although they bore the judge’s signature.

As he posted the initial documents online, Wood reacted skeptically to what he described as the judge’s reversal.

“What???” Wood asked on Twitter, adding, “Machines are owned by State & @GaSecofState administers state laws on elections. Why are GA officials determined to wipe these machines clean….Your guess is as good as mine.”

In the pair of suits in Georgia and Michigan, Powell’s team has filed statements of experts and witnesses alleging that Biden’s apparent victory and elsewhere was the result of implausible vote totals in specific areas and supposed episodes where Biden won large batches of votes as Trump picked up few or none.

In the Michigan case, Powell and other lawyers filed an emergency motion Sunday night, making claims that Biden raced ahead in the state as a result of four unexplained surges in his vote total that one expert asserted were “physically impossible” based on limitations of the voting systems involved.

Other experts have said absentee and mail-in ballots were often counted after in-person votes and that the mail-in ballots were long expected to favor Biden, especially since Trump discouraged his voters from using them. Spokespeople for state and county officials have said many of the anecdotes of other irregularities are erroneous or easily explainable.

Some of the alleged irregularities are being reported in statements from witnesses whose names have not been made public or were deleted from court filings. Powell and her co-counsel have argued such secrecy is justified because of threats and harassment directed to lawyers and witnesses involved in the recent court cases alleging election fraud.

While Powell was dismissed from the Trump legal team, the president seems to remain convinced by many of her allegations, including the assertion of huge unexplained upticks in Biden’s votes.

“This election was over. And then they did dumps,” Trump said on Fox Business Channel Sunday. “They called them dumps. Big massive dumps in Michigan, and Pennsylvania, and all over.”

"The governor's done nothing. He's done absolutely nothing. I'm ashamed that I endorsed him," Trump said of Kemp during the Fox interview.