Israelis in Fear over Iran’s Reprisal for Assassination of N. Scientist 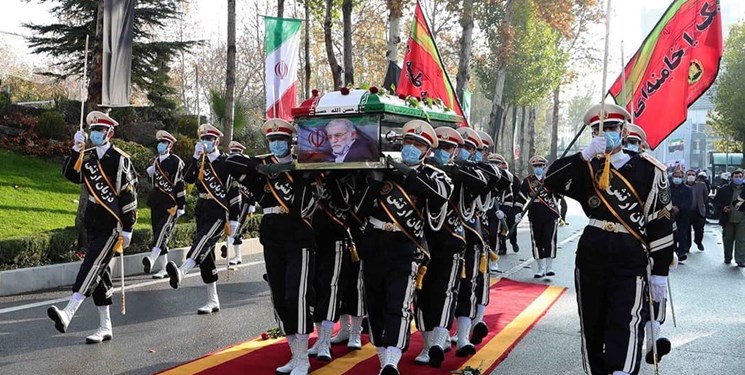 TEHRAN (FNA)- The Israeli and US officials have been holding several meetings to study different possibilities for Iran’s retaliation after the assassination of nuclear scientist Mohsen Fakhrizadeh.

The Israeli newspaper Haaretz quoted sources as saying that senior officers in the Israel Defense Forces have met in recent days with their counterparts at US Central Command, aiming to tighten the links between the two militaries in case Iran retaliates after last week’s assassination of its top nuclear scientist.

It added that the coordination includes protocols for detecting missile launches toward Israel and US targets in the region.

The CNN had earlier quoted a senior US administration official as saying that Israel was behind the assassination of Iran's top nuclear scientist but declined to give details about whether the Trump administration knew about the attack before it was carried out or provided support.

The official said that in the past, Israelis have shared information with the US about their targets and covert operations before carrying them out but would not say if they did so in this instance. The Iranian nuclear scientist, Mohsen Fakhrizadeh had been a target for the Israelis for a long time, the official added.

Israel put its embassies around the world on high alert last Saturday after Iranian threats of retaliation following the killing of a nuclear scientist near Tehran, Israeli N12 news reported.

Also, Hebrew-language newspaper Yedioth Ahronoth reported that the Israeli counter-terrorism commission warned Israelis a couple of weeks ago to remain cautious when they travel to the UAE and Bahrain. "The warning was doubled after the assassination of Fakhrizadeh," it pointed out.

The paper added that the counter-terrorism commission expects that thousands of Israelis will visit the Persian Gulf states for tourism and trade in the coming weeks.

"The National Security Council said that there are real threats to the security of Israeli citizens visiting the UAE in the light of existing activities of terror organisations," added the Israeli newspaper. The commission says that there is a "significant tangible threat" of attacks against Israeli citizens in the (Persian) Gulf.

Meantime, France 24 reported that Israel had warned Thursday of an increased threat against its citizens abroad following Iran's call to avenge last week's assassination of its top nuclear scientist.

"In light of recent threats from Iranian elements... we fear that Iran may attack Israeli targets," the Israeli foreign ministry said.

It warned of possible attacks against its nationals in Africa and in countries geographically close to Iran, citing Georgia, Azerbaijan, Turkey, the Kurdish region of Iraq, the United Arab Emirates and Bahrain.

Also, Times of Israel reported that Tel Aviv has warned nuclear scientists who used to work at its Dimona reactor to take increased security measures amid fears they could be targeted.

It added that Israeli scientists have been told to step up their vigilance. At least one former Dimona scientist was told to change his daily routine, not take walks along set paths, and to be vigilant about suspicious packages.

Meantime, a Hezbollah drone flew over the occupied territories’ Galilee and returned safely to Lebanon despite high alert among the ranks of the Israeli occupation army last October, a report said on Thursday.

Lebanese Daily Al-Akhbar reported that a Hezbollah drone managed to enter the airspace of occupied Palestine on October 26 as the Israeli occupation army was on high alert and waging the so-called “Lethal Arrow” maneuver.

“The maneuver was accompanied with high activity by the Israeli air force,” the Lebanese daily said.

“One of the maneuver’s goals was to prevent drones from getting into the Palestinian airspace,” Al-Akhbar said, highlighting the paradox.

The drone managed to capture photos and footage of the occupied region of Galilee and then returned to its base in Lebanon safely, the daily revealed.

Meantime, an analyst said that Israel may resort to attacks against its own civilian targets in a false-flag operation in order to start a ballyhoo and preempt a major Iranian retaliation.

“One of the features of a successful retaliation is its surprising nature and uncertainty about its time. Surprise is a major factor for a successful attack and should always be born in mind by strategists in picking up the target of attack, the type of battlefield, type of attack and specially the time of attack. Under such circumstances, the Israelis now intend to make the Iranian attack predictable, specially when it comes to its timing as they do not want to be exhasted after standing on alert for a long time, and hence, are trying to provoke Iran to launch the retaliation in a rush and in a time span as short as possible,” Senior Political Analyst Seyed Mostafa Khoshcheshm told the Iranian state-run TV on Monday night.

“Meantime, the Zionists might mastermind a false-flag operation to attack their own civilians, like Israeli tourists, overseas, specially in some Arab countries of the region to accuse Iran and launch a political and media campaign on the international scene through the cooperation of the US and enjoy engagement of a third party state to mount pressure on Iran at international bodies for picking up civilians for an act of reprisal, all to dissuade Tehran's response and escape its act of reprisal,” he added.