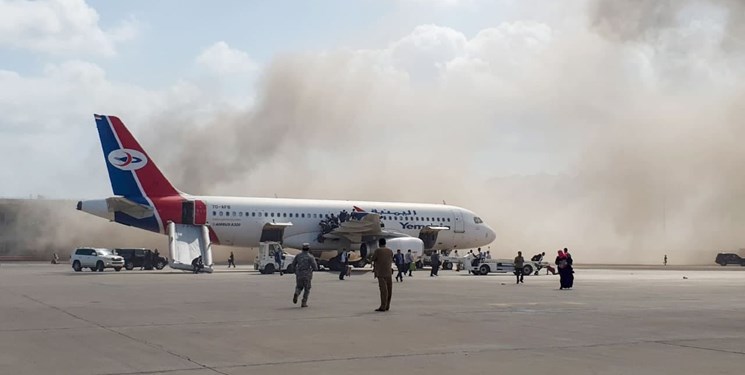 TEHRAN (FNA)- The Saudi-led coalition's warplanes carried out air attacks in parts of the Yemeni capital, Sana'a, hours after explosions struck the main airport in the Southern city of Aden killing at least 26 people and injuring dozens more.

The coalition launched the raids overnight on Sana'a International Airport, and two sites belonging the Houthi Ansarullah movement in Rima Hamid in Sanhan district and Wadi Rjam in Bani Hashish district situated in Southern Sana'a, according to Al-Masirah TV.

On Wednesday, explosions hit an airport in Aden after a plane carrying a self-proclaimed government backed by Saudi Arabia landed from Riyadh. Hours after the blast, a second explosion was heard around Aden’s Maasheq presidential palace.

No group or party claimed responsibility for the deadly incident, but some Arab media outlets have blamed the UAE that are in power struggle with Saudi Arabia over Southern Yemen and do not recognize the Riyadh-backed Mansour Hadi government. The Saudis are the only party invovled in the Yemen war that recognize Hadi as a legal president. Hadi's term ended years ago and he defied stepping down, triggering war in the already impoverished Arab country.

Some others blamed the Muslim Brotherhood offshoot, Al-Islah party, for the airport bombing after Mansour Hadi gave the party no share in the new cabinet.

A third group have blamed the Ansarullah government for the attack.

Saudi Arabia launched a devastating military aggression against Yemen in March 2015 in collaboration with a number of its allied states, and with arms support from the US and several Western countries. The aim was to return to power a Riyadh-backed regime of former president Abd Rabbuh Mansur Hadi and defeat the Houthi Ansarullah movement that has taken control of state matters.

The UN refers to the situation in Yemen as the world's worst humanitarian crisis.