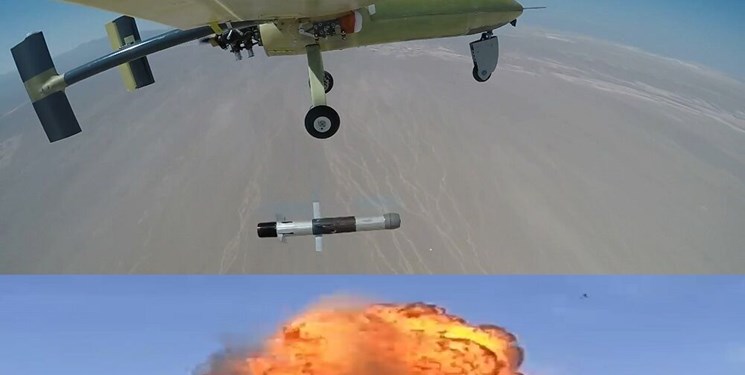 "Over the last few years, with the efforts of Iran's young experts and scientists in the Army and the Ministry of Defense, intelligent weapons for drones have been designed and produced, some of which have been tested during the current event," Deputy Commander of the Iranian Army for Operations Rear Admiral Mahmoud Mousavi said.

Almas missile which has been made by Iranian scientists and experts is able to destroy targets on the ground with great precision.

The first major drone exercise of the Iranian Army began in the northern central province of Semnan on Tuesday.

Hundreds of combat drones are participating in the drills.

Earlier, Rear Admiral Mousavi said the exercise included tracing and destroying air targets by means of air-to-air missiles, and also included destroying targets on the ground by means of bombs and precision missiles.

In a relevant development on Wednesday, the Iranian Army successfully test-fired Azarakhsh (Thunderbolt) missile from the home-grown Karrar-class drone on Wednesday during the major drone drills.

Azarakhsh- air-to-air missile successfully identified and annihilated its hypothetical targets. This is the first time the missile is being used in a war-game.

The Spokesman of the drills, Rear Admiral Mahmoud Mousavi, announced that constant monitoring of the borders through the drones is among the aims of the maneuver.

“Today, the borders are being carefully monitored and observed by the Army forces via drones equipped with surveillance and electronic information systems,” Mousavi said, stressing, "The Islamic Republic of Iran's Army is capable of giving strong response to any aggression by enemies."

On Tuesday, the Iranian Army showcased hundreds of its drones during the large-scale exercises underway in Semnan province in the presence of the Chief of Staff of the Iranian Armed Forces Major General Mohammad Hossein Baqeri and a number of Army commanders.

Major General Baqeri paid a visit to the Army drone units consisting of hundreds of UAVs deployed in an area stretching over one square kilometer.

The drones included the Army’s pilotless operation, combat, interception, detection, surveillance, organic war, suicide UAVs of all the four forces of the Army.

The displayed UAVs, enjoying various kinds of combat and logistic multi-rotors, are capable of launching operations under the electronic war conditions and are also equipped with jamming systems and deception radars.

Some of the unveiled drones were the recent products of the Iranian Army.

The Iranian Army started its first large-scale drone combat wargames in Semnan province on Tuesday with the participation of hundreds of drones used by the Ground Force, Air Force and Navy, Deputy Chief of Operations of Iran's Army Admiral Mahmoud Mousavi said.