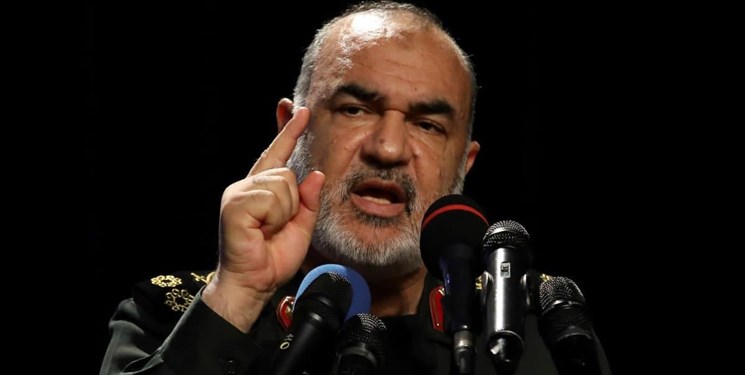 TEHRAN (FNA)- Commander of the Islamic Revolution Guards Corps Major General Hossein Salami warned the enemies of Iran against making the slightest mistake in the Persian Gulf region, and said that the IRGC Navy is fully ready to defend the country.

In relevant remarks on Wednesday, Iranian Army Commander Major General Abdolrahim Mousavi said that the Islamic Republic is seriously following up expelling the US from the West Asia region as the first step in taking revenge for the assassination of Iran's anti-terror commander Lieutenant General Qassem Soleimani.

"The foes think that they could prevent Iran from taking the “harsh revenge” by resorting to their empty power, but they should know that scale, place and time of taking revenge depend on Tehran’s decision and that they would not be able to predict the matters," Major General Mousavi said.

He reiterated that the least expectation from the US is to leave the West Asia region.

In relevant remarks on Sunday, Spokesman of the Islamic Revolution Guards Corps Brigadier General Ramezan Sharif said the United States has been exhausted to wait for Iran's revenge for the assassination of General Soleimani as it is Iran that will determine the time and place of its act of vengeance.

“The US has become tired of standing on full alert and waiting for Iran’s revenge,” Sahrif said, adding, “It is Iran that determines the time and place of revenge for Soleimani’s assassination.”

"Iran still has enough time to avenge the blood of Lieutenant General Qassem Soleimani," he noted.

"This revenge must have the greatest impact on the enemy," Sharif said.

In relevant remarks last week, Former Commander of the Islamic Revolution Guards Corps Mohsen Rezayee lauded former IRGC Quds Force Commander Lieutenant General Qassem Soleimani for his anti-terrorism efforts, and said expulsion of the US military forces from the region will be Iran’s reprisal for his assassination.

“Of course, our main revenge started with Ayn al-Assad, and our harsh revenge is the struggle to expel the US from the region, so that the regional states will get rid of the terrorists forever,” Rezayee, the secretary of Iran’s Expediency Council, said on the sidelines of a ceremony to commemorate the first anniversary of General Soleimani’s martyrdom in the Southeastern province of Kerman on Saturday.

He praised General Soleimani for his anti-terrorism efforts, saying that under the conditions that no army and country could stand against the ISIL, the Iranian anti-terror General succeeded in suppressing the terrorists.