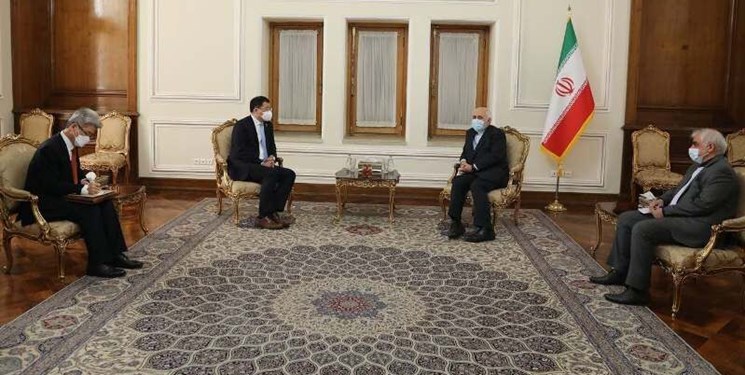 TEHRAN (FNA)- Iranian Foreign Minister Mohammad Javad Zarif described freezing of Iran's assets by South Korean banks as a stumbling block to the further expansion of bilateral ties, and stressed the need for Seoul to unblock his nation's crude revenues.

“The freezing of Iran’s money by the South Korean banks has created the biggest obstacle on development of Iran-South Korea relations,” Zarif said on Monday in his meeting with the visiting South Korean Deputy Foreign Minister, Choi Jong-kun.

He added that Seoul should immediately release Iran’s financial resources.

Zarif stated that the illegal action of South Korean banks has caused the Iranian parliamentarians to stress that the problem should be resolved as soon as possible.

Jong-kun, for his part, stressed South Korea's will to resolve the problem, noting that Seoul will make every effort to provide Iran’s access to the blocked revenues.

Referring to the seizure of the South Korean oil-tanker in the Persian Gulf, Zarif stressed that ship has been seized due to polluting the Persian Gulf waters, adding that the issue is being pursued within the framework of legal and judicial regulations.

On Monday January 4, the Islamic Revolution Guards Corps (IRGC) announced that it had stopped a South Korean-flagged ship for environmental pollution in the Persian Gulf, adding that the ship has been taken to a port in Southern Iran.

In relevant remarks on Monday, Iran’s Deputy Foreign Minister Abbas Araqchi, in his meeting with Choi Jong-kun, noted that the seizure of the ship in the Persian Gulf and Iranian waters was solely due to technical considerations and environmental pollution, stressing that the issue has nothing to do with blocking Iran’s oil money by Seoul.