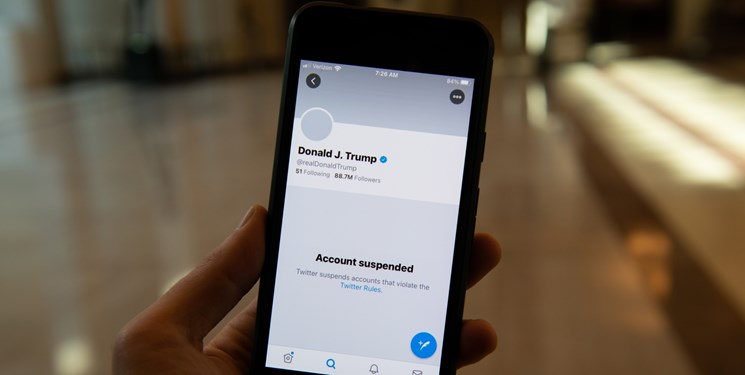 TEHRAN (FNA)- Citing the danger of inciting further acts of violence, on January 8 Twitter suspended United States President Donald Trump’s account – three days after he called on his supporters on Twitter to march towards the US Capitol building while Congress was meeting to certify Joe Biden as the winner of the 2020 presidential election.

“After close review of recent Tweets from the @realDonaldTrump account and the context around them we have permanently suspended the account due to the risk of further incitement of violence,” Twitter said, Al-Jazeera reported.

Thousands of rioters violently stormed the Capitol building on Wednesday, forcing lawmakers to be rushed to safety or hide under furniture. Five people died.

The move cut Trump off from his nearly 90 million followers on the platform. Facebook had issued a similar move, banning him from its social networking site, at least for the remainder of his time in office, which ends on January 20.

It also set off a wave of reactions from officials and world leaders. As several welcomed the move, many – among them critics of the divisive leader – blasted the action as politically motivated and an infringement on free speech.

Here are their reactions:

German Chancellor Angela Merkel’s spokesperson on Monday said Twitter’s decision to ban Trump from its platform is “problematic”, adding that the freedom of opinion is of “elementary significance”.

“This fundamental right can be intervened in, but according to the law and within the framework defined by legislators, not according to a decision by the management of social media platforms,” Steffen Seibert told reporters in Berlin.

“Seen from this angle,” he said, “the chancellor considers it problematic that the accounts of the US president have now been permanently blocked.”

Mexican President Andres Manuel Lopez Obrador blasted the decision to ban Trump from social media sites, adding that it was a “bad sign” that private companies have the authority to censor opinions.

“I don’t like anybody being censored or taking away from the right to post a message on Twitter or Facebook. I don’t agree with that, I don’t accept that,” Lopez Obrador said during a regular news conference on Friday.

“A court of censorship like the Inquisition to manage public opinion: this is really serious,” he said.

In a lengthy thread on Twitter, Russian opposition figure and Kremlin critic Alexey Navalny blasted the move as “an unacceptable act of censorship” adding that the decision, which was “based on emotions and personal political preferences”, could serve as a precedent to clamp down of freedom of speech elsewhere.

Nikki Haley, the former US ambassador to the United Nations and a Trump ally, likened the move to political censorship in China.

US Senator from Virginia Mark Warner, a Democrat, said the move was an “overdue step” in the fight against misinformation on social media.

US Senator from West Virginia Joe Manchin, a Democrat, also welcomed the action, thanking Twitter in a post.

Hillary Clinton, a Democrat who ran unsuccessfully against Trump in the 2016 presidential election, shared a Tweet she wrote during the campaign calling on Trump to delete his account, and simply added a check mark.

Trump’s eldest son, Donald Jr, has been firing off a series of tweets condemning the move. In his first tweet, he said free speech “no longer exists in America”. He has since been trying to gather support by having people look for information on the website donjr.com.

The son of Jair Bolsonaro, Brazil’s far-right President, Eduardo Bolsonaro called Twitter “authoritarian” and tweeted, “A world where Maduro is on social media, but Trump is suspended cannot be normal.”

On Sunday, he announced that he would be “permanently” using Trump’s profile picture for his own account.

Quoting his Telegran channel, the Financial Times reported that Chechen leader Ramzan Kadyrov said that he and Trump now have something in common, after Twitter had blocked his own accounts. He called the network’s  measure an act of divine justice.

“Now I have something in common with Donald Trump: whereas previously he blocked my accounts on social networks, now the Almighty God has restored justice, and, as a result, the accounts of the mutinous Donald Trump were also blocked,” Kadyrov reportedly wrote.