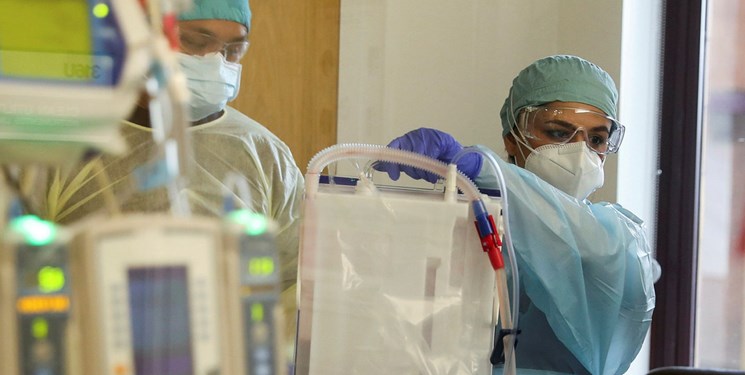 TEHRAN (FNA)- The coronavirus death toll in California reached 30,000 on Monday, another staggering milestone as the nation's most populous state endures the worst surge of the nearly yearlong pandemic.

Newly confirmed infections are rising at a dizzying rate of more than a quarter-million a week and during the weekend a record 1,163 deaths were reported, The Daily Mail reported.

Epicenter Los Angeles County has seen 1,500 deaths in the past week and 10 people every minute are testing positive there. Health officials there are telling LA County residents to wear a mask even when at home if they go outside regularly and live with someone elderly or otherwise at high risk.

"The damaging impact to our families and local hospitals from this surge is the worst disaster our county has experienced for decades," health director Barbara Ferrer said.

It took California six months to record its first 10,000 deaths. But in barely a month, the total rose from 20,000 to 30,000, according to data collected by Johns Hopkins University. Since the surge began in November, LA County has seen deaths increase by 1,000 percent. California ranks third nationally, behind Texas and New York, which is No. 1 with nearly 40,000 deaths.

California has deployed 88 refrigerated trailers to use as makeshift morgues mostly in hard-hit Southern California, where traditional storage space is dwindling.

Hospitalizations also have exploded in California and many hospitals are stretched to the limit. Still, California Gov. Gavin Newsom and the state´s top health officer said there is a sliver of hope, with hospitalizations leveling off in the last week and vaccinations about to shift into a higher gear.

Mass vaccinations for thousands of medical workers will be conducted at baseball stadiums in Los Angeles and San Diego and at fairgrounds in Fresno and Sacramento. They are among cities nationwide converting huge parking lots into massive vaccination stations to ramp up inoculations after the initial rollout fell below expectations.

Orange County and Disneyland Resort announced that a guest parking lot near the Anaheim theme park will be a vaccination site.

Meanwhile, new hospital admissions dropped from about 3,500 each day earlier this month to about 2,500, "a significant difference" that shows the earlier holiday surge from Christmas and Hanukkah "isn't as significant as we had anticipated", said Dr. Mark Ghaly, secretary of the California Health and Human Services Agency.

Yet recent frightening jumps in new positive cases show the state may simply have brought itself time to prepare for what officials still expect to be an end-of-month peak in part driven by New Year's celebrations, Ghaly and Newsom said.

The state may have "a little breathing room", Ghaly said, enough for hospitals to prepare, to ensure they can provide enough oxygen both in medical facilities and when sending patients home, and for 1,000 newly arriving contract medical workers to be augmented by another 1,000 or so before the surge peaks.

"I don't want to think that we´re out of the woods in any measure," Ghaly said, adding later that "We're in the early parts of that holiday surge. It looks encouraging at the moment".

Newsom acknowledged the rollout of vaccines has been too slow and he pledged 1 million shots will be administered this week, more than twice what's been done so far.

That effort will require what Newsom called an "all-hands-on-deck approach", including having vaccinations dispensed by pharmacists and pharmacy technicians, dentists, paramedics and emergency medical technicians, and members of the California National Guard.

Ghaly and Newsom said relatively few medical workers and veterans seemed to be refusing or delaying the shots, contradicting what some local health officials have found.

Acceptance will vary by region, they acknowledged, but said a state survey found only about 2% of University of California medical system healthcare workers had declined the vaccine, while 81% of residents at five state-operated veterans' homes had been vaccinated.

The state will vastly expand its effort with new mass vaccination sites at parking lots for LA's Dodger Stadium, Petco Park in San Diego and the CalExpo site in Sacramento.

Cars lined up early Monday near the downtown stadium in San Diego, where officials aimed to inoculate 5,000 health care workers a day at the "vaccination super station".

The first day was limited to 2,500 people to work out kinks. Medical staff under a row of white tents injected health care workers as they drove through, then directed them to wait nearby for 15 minutes to be observed for any reactions.

"It´s kind of like a Disneyland ride" with cars moving through, said Heather Buschman, spokeswoman for UC San Diego Health, whose medical staff was administering the shots.

'People are eager to come out and grateful for this opportunity," she said, with more than 12,500 health care workers in San Diego County initially scheduling an appointment.

The city of Los Angeles announced late Sunday that its huge COVID-19 testing site at Dodger Stadium will be transformed into a massive vaccination center by the end of the week. That will temporarily reduce LA County's testing capacity but with 12,000 inoculations forecast daily it will more than triple daily vaccinations.

Saad Omer, director of the Yale Institute for Global Health, applauded such vaccination super sites. He said officials should be able to keep vaccinating health care workers and the elderly in long-term care facilities even as it prepares to start inoculating those age 75 and up, teachers, emergency workers, and those who work in food and agriculture.

"Our country should be able to walk and chew gum when comes to its immunization program," Omer said.