DM Warns of Iran's Rigid Response to Any Hostile Move 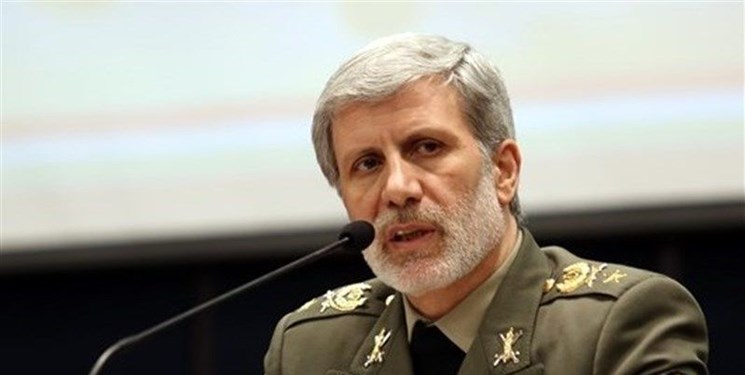 TEHRAN (FNA)- Iranian Defense Minister Brigadier General Amir Hatami underlined that the slightest mistake by the enemy will surely receive a rigid and crushing response from the country's Armed Forces.

"Iran is ready to defend the security of its own and the region, which are interwoven and will resist any threat with determination," the Iranian Defense Minister said.

Brigadier General Hatami reiterated that the enemies should be aware not to make a mistake or miscalculation because if they do so, they will have to pay a heavy price.

“The IRGC Navy is fully prepared to defend the borders, flag and territorial integrity of the Islamic Republic of Iran,” Tangsiri said, adding, “Any country that intends to invade or pose a threat to the Islamic land will face our very decisive and harsh response.”

He made the remarks on the 5th anniversary of capturing 10 American marines by the IRGC Navy near the Iranian Farsi Island.

“Five years ago two American boats carrying ten marines heading for Bahrain approached the five-mile distance of Iran’s Farsi Island on their way, which is within the territorial waters of the Islamic Republic, and although there were two American and French super-carriers and five other destroyers in the region, the intruding US boats were seized by the brave IRGC Navy forces,” the commander continued.

The IRGC seized two US Navy boats on January 12, 2016 and detained ten US marines on Iran's Farsi Island in the Persian Gulf. Nine men and one woman arrived in Iran's territorial waters in the Persian Gulf illegally when they were captured by the IRGC Navy. They were freed a day later.

Each of the two US Navy boats that were 3 nautical miles deep into the Iranian waters when they were captured by the IRGC Navy's second naval zone were equipped with three 50mm caliber machine guns and other light and semi-heavy weapons.

IRGC officials said the coordinates recorded on the GPS devices taken from the 10 US marines confirmed their trespassing as well.

The 10 US marines were released by the IRGC. The IRGC declared in a statement that "it has released the US marines and their vessels in international waters" after its investigations showed that they had gone astray during their voyage in the Persian Gulf.

In its statement, the IRGC pointed out that its investigations show that the US combat vessels' illegal entry into the Iranian waters was not the result of a purposeful act.

"Following technical and operational investigations and in interaction with relevant political and national security bodies of the country and after it became clear that the US combat vessels' illegal entry into the Islamic Republic of Iran's waters was the result of an unintentional action and a mistake and after they extended an apology, the decision was made to release them," the statement said.

"The Americans have undertaken not to repeat such mistakes," it added, and continued, "The captured marines were released in international waters under the supervision of the IRGC Navy moments ago."

The IRGC statement blamed the US flotilla for its "excited and unprofessional moves", but said the IRGC navy could handle the situation and restored calm to the region through powerful and wise moves.

Senior US officials, including former Secretary of State John Kerry, were in contact with their Iranian counterparts on the fate of the marines since their detention, and according to Iranian officials, Foreign Minister Mohammad Javad Zarif had told Kerry that the US should extend a formal apology first.

According to the statement, the Americans have extended an apology.