‘We Are Victims, Not Criminals’: Asylum Seekers Protest Conditions in Military Camp in England 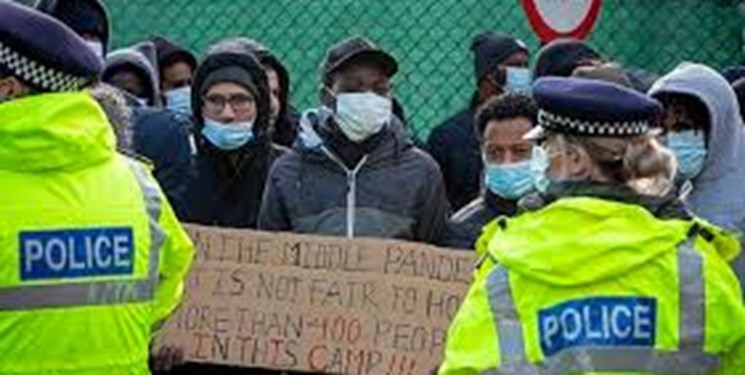 TEHRAN (FNA)- Dozens of asylum seekers mounted a protest over the conditions they are being held in at a former military camp in Kent, warning that being there is putting them at risk.

More than a dozen police officers responded to the peaceful protest outside Napier Barracks in Folkestone on Tuesday afternoon. Video footage shows officers lined up in front of the camp’s residents as they hold up banners warning of unsafe conditions in the camp, The Independent reported.

Last September, the former army base was turned into accommodation for asylum-seeking men and is currently said to be housing around 400 people.

Lawyers have stated the conditions at the barracks, which see residents sleeping metres apart and around 15 to a room with sheets hanging between them, may breach the law, and have accused the Home Office of trying to “avoid scrutiny” of the situation.

There are reported to have been at least two suicide attempts at the facility since Friday.

Hundreds of asylum seekers in the facility are said to be on hunger strike, and a number of residents have been sleeping outdoors in protest against the living conditions. They say they will stay out until the government provides accommodation that meets their basic needs.

It comes after it emerged that the Home Office was facing legal action over plans to build a similar camp for up to 200 asylum seekers next to Yarl’s Wood immigration removal centre, with lawyers arguing that the move would be unlawful.

Ahmed, 21, from Sudan, who took part in the protest on Tuesday and has been sleeping outside for three days, told The Independent, “We live in the worst conditions. There have been suicide attempts and the authorities have done nothing. Why? We are victims, not criminals."

“We are here to request international protection. Where are the humanitarian organisations?" he asked.

Another asylum seeker, who didn’t want to be named, noted, “We also protested in December and the authorities said 10 people would be released every week and that the asylum cases would be sped up. But they haven’t", adding, “Even in Africa and the Middle East, camps are not like this. The food is bad, we can’t get healthcare, it is cold.”

A third asylum seeker, Jafar, 38, from Iran, said the way the camp was organised was “dangerously wrong” and that coronavirus rules were “impossible to follow”.

“You can’t keep to rules of social distancing. We all eat in the same room and share the same bathrooms and toilets. The danger of the virus spreading in here is huge,” he added.

Bridget Chapman, of Kent Refugee Action Network, who was present during the protest on Tuesday, said, “Residents at Napier have an absolute right to peaceful protest about the awful and dangerous conditions they are living in", adding, “The barracks were never a suitable place to accommodate very vulnerable and traumatised people. Our organisation and many others said that all along. The Home Office must now work urgently to close the camp and ensure that people are housed in safe and appropriate conditions.”

Sally, of Care4Calais, who has been delivering clothing donations to asylum seekers in the camp, stated she was concerned about the lack of access to medical care in the facility.

“Chris Philp said the Home Office would provide wraparound medical care. That is in no way happening. They have one nurse onsite. He can prescribe medication, but he can’t them access to any talking therapy or anything,” she noted.

“Whichever side of the debate you sit on with immigration, that camp should not be there. It’s putting pressure on local services at times when we’ve got COVID cases going through the roof and hospitals absolutely full. This is not working for the asylum seekers or the community,” she continued.

Kent Police confirmed that the force responded to reports of a protest at Napier Barracks at around midday on Tuesday and that officers engaged with those at the site and remained at the location to support the Home Office and ensure public safety.

Chris Philp, the Immigration Compliance Minister, said, “The government takes the wellbeing of asylum seekers extremely seriously. We provide asylum seekers with safe, warm, COVID secure suitable accommodation where they receive three meals a day whilst their claims are being processed."

“They are not detained and are free to come and go in line with COVID-19 restrictions. We have a robust complaints process where the people who we support or people representing them can raise concerns if they are not rectified through the 24/7 helpline run by Migrant Help," he stated.

“Those at Napier have generally come from France by small boat. This journey is not only dangerous but unnecessary – France is a safe country with a well-functioning asylum system. Migrants should not make this journey in the first place,” he added.