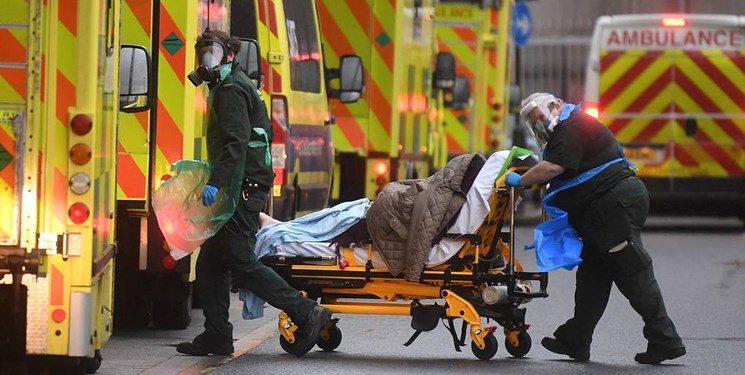 TEHRAN (FNA)- Prime Minister Boris Johnson warned of a “very substantial” risk that the NHS will run out of intensive care beds, as daily coronavirus deaths hit a record of 1,564 and the government’s chief scientific adviser warned they could remain at similar levels for weeks.

The sombre figure – representing fatalities reported on 13 January within 28 days of a positive test for COVID-19 – brought the total official UK death toll for the pandemic to 84,767. However, by another measure, counting all death certificates mentioning coronavirus as well as more recent fatalities, the number has now passed 100,000.

With a record 32,689 COVID patients in hospital in England alone, the prime minister said the situation was now “very, very tough” in the NHS and the strain on staff was “colossal”.

In-patient numbers were up 18 percent over the week and 85 percent higher than at Christmas and currently stand 70 percent above levels during the first wave of the pandemic in April last year.

In a gloomy warning to MPs, Johnson said, “If you asked me, when do we think that the ICU [intensive care unit] capacity is likely to be overtopped, I can't give you a prediction for that – but all I can say is that the risk is very substantial", The Independent reported.

“We have to keep the pressure off the NHS and the only way to do that is to follow the current lockdown,” he added.

Chief scientific adviser Sir Patrick Vallance told ITV’s Peston, “I’m afraid we’re in a period of high death numbers that’s going to carry on for some weeks, it’s not going to come down quickly, even if the measures that are in place now start to reduce the infection numbers. So we’re in for a pretty grim period, I’m afraid.”

He stated there were signs that the nationwide lockdown restrictions were succeeding in bringing the virus under control, but warned that “it may be that we need more on top of this at some point”.

As total vaccination figures reached 2,639,309 first jabs – up by 207,661 from Tuesday – Johnson announced plans to accelerate the programme by moving “as soon as we can” to 24/7 operations in some centres.

But he told MPs it was “far, far too early” to be sure that lockdown measures – such as the closure of English schools to most pupils – will be rolled back at a review due on February 15.

Johnson’s comments came as a study by University College London warned that patients in crowded wards were at higher risk of dying.

“The association between risk of death and bed occupancy is linear and as occupancy increases the worse patients’ outcomes become,” said study author Dr. Bilal Mateen, adding, “To put into context as to why these results are so important, at the end of 2020, 37 of 123 recorded NHS trusts were experiencing over 85 percent ICU bed occupancy.”

Appearing before the House of Commons Liaison Committee, Johnson took some comfort from statistics showing the daily number of new lab-confirmed cases of coronavirus in the UK was at 47,525, continuing a downward trend from the pandemic high of 68,053 recorded on Friday.

Positive cases are a leading indicator, with trends likely to be echoed some days later in hospitalisation figures and later still in deaths.

Johnson pointed to “some early signs of progress in restraining the growth of the virus, some signs perhaps of flattening and levelling off in some parts”.

Vallance said, “It does look as though some places that have been in the Tier 4 level restrictions the longest – and now the lockdown with school closures – they’re levelling off or coming down.”

Johnson added the government was taking steps to prevent the spread to the UK of a virulent new strain of COVID-19 discovered in Brazil, but he was unable to say what these measures were when pressed by Labour’s Yvette Cooper.

The PM signalled that workers making vaccines in the UK could be fast-tracked to receive jabs, after fears that high absence rates due to sickness or self-isolation were slowing production.

But he played down fears of vaccine delays, promising there was a “big, big stream of vaccines coming down the track”.

Vaccines Minister Nadhim Zahawi refused to reveal how many doses of vaccine were due to be delivered by manufacturers in the coming weeks, telling MPs that “showing off” about batches would make life difficult for the companies involved.

But he told the Commons Science and Technology Committee he was confident of ramping up vaccinations to 2 million a week by the end of the month.

While there was no evidence of either the Kent or the South African variant of COVID proving resistant to currently available vaccines, Zahawi told MPs scientists were prepared to tweak their formulas if and when resistant strains emerge.

“We can be ready within a period of 30 to 40 days, we would have the next vaccine being manufactured,” he told the committee, noting, “We’ve invested, not just in infrastructure, but in thinking through how we would do that.”

A new online survey by Ipsos MORI found that six in 10 Britons (60 percent) are finding it harder to stay positive day-to-day compared with before the virus – an 8-point increase from November and the highest number since the regular poll began. More women were finding it harder than men, by a margin of 68 percent to 52 percent.